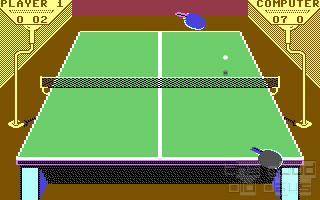 First there was ping-pong. Then it got more 'official' and was called table tennis. Then nothing happened. And people waited for another evolution. But they really had to wait for a long time! Until the late 20th century to be exact. Then the messiah arrived: Pong! It took the basic ping- pong concept to whole new heights by adding an artificial opponent and making it all digital.

In the days of the 'home computers', there was another trend though. The digital game was set in new surroundings resembling the real world of table tennis. It is difficult to classify. Some would call it another step in the evolution and that is true because these games are technically more elaborate than the simple Pong. On the other hand, it's also a 'back to the basics' movement because the 'full digitalisation' was stopped, the game itself wasn't taken to another, completely independent level. Both theories are true in their own way.

Superstar Ping-Pong plays very basic. You're controlling your 'racket' (no idea what this is called in English) in horizontal direction (or vertical, depending on the perspective you chose) and you can swing it to hit the ball. Depending on when you hit the ball, it takes another direction. So timing is crucial.

Rules are the standard ones from that time (I heard they changed at some point, but I'm not sure how): every five points, the service changes to the other player. The one who reaches 21 points first, wins a set. Two sets are required to win the game.

So why the low rating? Mainly because the game is so limited. It is just tiny! All you can do is play against the computer or against another human. Not even a tournament modus. It just gets boring too quickly. The controls also aren't the most exact. And somehow, you even miss the simplicity of the basic Pong.

On the other hand, this game is as good as table tennis on a computer gets. It is just a sport which requires a bit more than just hitting the ball (what the game is about) - but how to convert that into a game? The graphics are good, the perspectives look neat. So it is actually a good game for a short break or two. 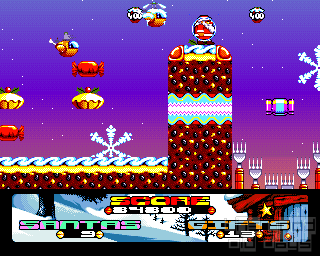