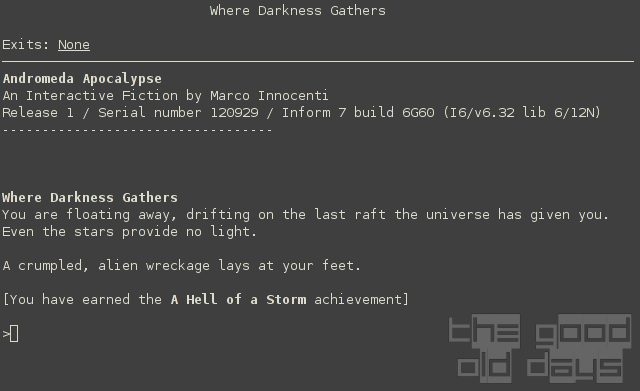 Andromeda Apocalypse is a sequel to Andromeda Awakening, a game which, ironically, should really have had this one's title, because… you know… it was about the apocalyptic destruction of a whole world. The actual Apocalypse, on the other hand, is a rather slow-paced exploration game set in an abandoned space station (strictly speaking, it's a space ship, but of huge proportions). Strange naming aside, although there is a strong continuity between the games, it is not absolutely necessary to have played the predecessor.

This game begins with the protagonist crashing into said space station (I will just call it that from now on) which, judging from its state of disrepair, has been floating around unsupervised for a long, long time. There is no sign of life anywhere to be found, but the life support systems seem to be sufficiently intact. So, as the genre dictates, the player has to learn the secrets of what happened here. It's a classic tale and a tried and solid structure: Following the layer principle, there is a local plot ('What happened to this space station?') embedded into the series' global plot (a whole galaxy being destroyed by devices of unknown origin and for unknown reasons).

In an attempt to avoid one of the pitfalls of such a structure, namely only mentioning the global picture at the beginning and at the ending while virtually forgetting all about it in the main body of the story, there are regular flashbacks to the time before the events of the first game. These, however, fall into another classic storytelling trap: the pseudo-interactive flashback. Although also parser-driven, they all consist of a chat with an old friend. It is plainly obvious that there is no way to influence anything in these scenes, they will simply wait (or loop) until the player complies and types what the game expects – that always only being 'talk to person'. So the present flow of the game is regularly interrupted by scenes which only frustrate because of their limited nature and which do not help to further the concrete plot points currently going on.

That is sad, because although significantly tuned down compared to the first game, Apocalypse offers quite an extensive set of implemented interactions in its main part. It also starts out slowly in this respect; although there is interaction, there are virtually no puzzles. This gradually improves in the course of the game, although it is never much. Only once or twice, you will encounter even slight roadblocks and even those will turn out to be wording problems rather than overly complex puzzles.

In a similarly 'modern-day' vein, the narrative tone is consciously grandiose, using many wannabe sophisticated words. This certainly is a question of taste, but it is not for everyone. Compared to the first part, Apocalypse certainly has the wider appeal, because several rough patches have been worked out, but it does leave the aftertaste of a game strongly influenced by and mainly trying to please a group of people which considers itself 'important' in the modern-day text adventure world at the expense of some of the author's own raw energy and vision. Which makes it more playable, but ultimately less surprising and only marginally above the dreaded mediocrity level. This route is not the way to make a game more relevant on the long term. 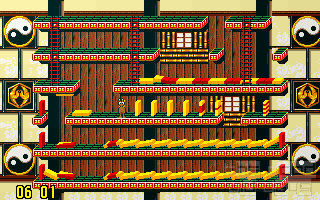