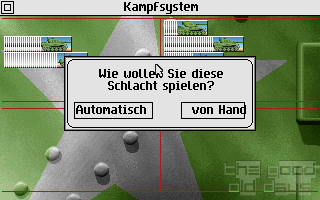 I still remember buying Campaign twenty years ago quite well. In autumn 1992, I was still in my first quarter at the maintenance division of the German army. After the basic training, I read one of common gaming magazines and found an ad for Campaign in there.

You have to understand that in autumn 1992, there weren't many tank simulations available yet. In M1 Tank Platoon, you could drive a platoon consisting of four tanks of one kind. Abrams Battle Tank was even worse in this respect, because it had only one single tank frighting against several enemies, and the game had more in common with console shooters than a tank simulation.

That is why I could hardly believe Campaign offered the unbelievable number of 122 playable tanks, half-track or wheeled vehicles. This high number of controllable vehicles is, apart from the impressive intro, the game's biggest strength. Only today, more than 20 years later, Campaign is beaten in this respect by the online game World of Tanks.

The game is separated into a strategic planning level and a tactical battle simulation. On strategic level, you can move units around on a zoomable map. Apart from that, there are airfields where you can group planes into squadrons, and production centres which produce supplies like fuel, ammunition or new tanks. The latter are only relevant in larger scenarios, though. You can pause the passage of time or speed it up on strategic level, which will be necessary in order to plan critical situations or skip over uneventful hours and days respectively.

When a combat unit approaches an enemy, the game switches to the battle simulation. This will start out paused. This is concenient, because now you can order a direction for every tank to head to. The lower limit of the map is the border to your own rear. Usually, there will be a couple of vehicles and tanks waiting there as reserve. Planes can be called with the plane switch, likewise for artillery. So it can make sense to, for example, scout tanks in an unarmed jeep and then call for such backup.

The map will be separated by two or three roads lined with houses (grey pixels). Trees are shown as green pixels. Mine fields appear as black spots and they are true death traps. Houses and trees are mainly just obstacles which will stop a tank. You can drive over them, but you will stop only a couple of metres further, so you have to backtrack to avoid the obstacle. Very ugly when this happens in the middle of a firefight. At all times during the battle, you can pause the action or switch to another tank. You can control every tank of your unit, but not at the same time, of course. If you're shot down, you can carry on the battle in the next tank…

The AI is acting quite weak in battle. The enemy tanks do shoot in the general direction of your own tank, but whether they will hit is more a question of (bad) luck than anything else. This is especially nasty for tanks with no turnable turret. These tanks will just drive along their route and they can be destroyed from behind quite easily, because they don't turn towards the closest enemy. I don't think, though, that this disrupts Campaign much; on the contrary, the game is fun because of this.

That is because as a player, you are tortured with particularly impractical keyboard controls. To drive forward, you have to rotate both tracks forward at the same time. In addition, you have the two turret rotation keys, the periscope raise and lower buttons and of course the fire button. If you have to maneuver backwards, there are two more keys to consider. In Campaign II, Empire Software fixed the AI problems, but without improving the controls. The result was a game for the bin…

This way, you can at least rejoice in shooting down enemy tanks. If you manage, the game will reveal its first setback. Destroyed tanks will simply turn grey, look slightly pixelised in the highest graphical detail and then disappear. Even more frustrating are the towed guns, like for example the 155mm Long Tom. They cannot move on their own and they only fire in the direction of a narrow corridor. Although these guns can be hooked up to some transporters and towed into anoter position, but this is still quite impractical or only makes sense when combined with mine fields. Fighting against towed guns, you will notice that destroying them can be very tough. In a test game, it took my assault tank almost 20 shots at point-blank range to finally turn a Long Tom gun grey.

The most likely reason: The assault tank has 25 attack points, Long Tom 28 defense. Why did the designers make the anti-tank weapons so strong? No idea. In any case, you should probably let a battle against such an anti-tank gun be calculated automatically. Apart from that, the tactical battle simulation is basically the icing of the cake.

The strategic simulation, on the other hand, is really poor. There are bugs hidden in the detail. Units can entrench themselves in the game. However, if you change the orders and have them move, the first tank of the unit will receive an immobile status. This will make the whole unit grind to a halt, even when the enemy starts some funny skeet shooting with his artillery or bombers. You get the same effect if a tank becomes immobile due to the effects of battle. Different from the airfield, you cannot form a new unit by splitting it off another. Probably this missing feature is also a bug?

Another bug is hidden in the editor. Saving your created scenarios is a game of luck. If a protection prompt appears after entering a file name… rejoice – it's saving the scenario. If Campaign crashes… well, that's the saving bug which can destroy hours of work just like that.

The producer “Empire Software” obviously didn't take the trouble of fixing these bugs or putting additional functionality or contents into Campaign. For example, why can the player place French, Japanese and Italian units in the editor although there are no vehicles of those nationalities? Also missing are units of smaller nations, like for example Poland, Hungary, Finland or the Netherlands. A few placeholder units would have done the game good, even if it had only been one vehicle/gun/plane per nation. At least I could not find any patches or updates for updates for Campaign in my research. Empire Software only published a data disk with 25 additional missions and in 1993, they produced Campaign II which received only a rating of 43% in Powerplay magazine and failed to impress the customers.

Campaign is a game which divides the gamer audience. One group likes the tactical battles and love the numerous playable vehicles, the other hate the game for its dilettantish AI and its buggy strategic level. Trying out Campaign will be worth it in any case. You should just try avoiding the known bugs. It is advisable to create large scenarios and only save them at the very end. If Campaign crashes, you will not even be able to play your scenario once, everything will be lost. Better build just small scenarios. Two units, one battle. You can pause at the strategic level at any time and switch to the scenario editor, place a new unit somewhere, remove another old one and continue the game from this point. This way, playing Campaign is certainly fun for a couple of hours. 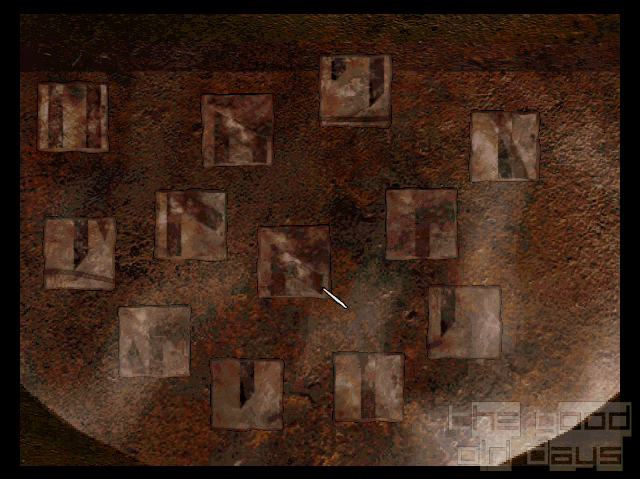