Escape from Summerland
for Interpreter (Z-Code) 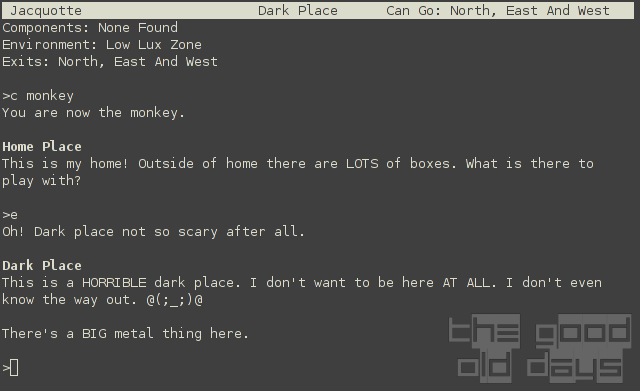 One major problem with the Annual IF Competition is frustration or at least a general disinterest setting in after playing through dozens of games. So it happened that I did not like Escape from Summerland at all initially: Why is this game on rails, forcing me to go into specific directions when others are mentioned as well? If I can't go anywhere else, just teleport me there! What the fuck are these stupid smileys doing there after every parser message? This is going to be bad! That's what I thought… until I understood what the game was actually doing: It was giving me an extremely helpful introduction to what the game would be about! The railroaded movement showed me the steps which I would have to retrace (in reverse order) later on in order to escape. The seemingly stupid parser responses after the first perspective switch characterised the second playable protagonist in a way that her relevant abilities would become clear immediately. In retrospect, I have only praise for this introduction to the game. Here it is: The example of non-interactive interactivity used for a good purpose!

So, the game is about escaping… not the most original theme in Text Adventures, but let's give it a go. Its speciality is that there are three playable protagonist between which the player can switch at will. None is your classic protagonist, though: We have a monkey (the one with the smileys who always just wants to play), a severely damaged military robot (the plot tells something about a devastating war going on which turns out to be exhilarantly irrelevant to the game) and the ghost of a recently killed man. The monkey is the last survivor of an abandoned fairground which the man had promised to take care of. Now that he's dead, his ghost sees it as his last duty to set the caged monkey, which would otherwise just starve to death, free.

Being a ghost, he cannot physically interact with his surroundings, though. That is where the active roles of the monkey and the robot come in: While their unique abilities have to be used to open passages and clear obstacles (being corporeal, they cannot just pass freely through doors, walls and ceilings), it is basically the ghost's job to moderate. That being necessary, because when switching into any of the roles, the representation of the location given to the player changes drastically according to the perception of the respective protagonist. Locations, objects and their descriptions change in ways which sometimes makes it hard to understand for the player what it is in front of his character. The ghost, still having a human perception, makes the translation of what might hide behind a “Civilian Discouragement Unit” (as named by the robot) much easier for the player.

The puzzles originating from the specific abilities and limitations of the three characters are quite clever. In an age when most games don't dare to even include puzzles at all, Escape from Summerland offers some mild brainteasers not all of which are actually even trivial! The narrative voice is of a similar high quality, with the three main characters being clearly distinct and the whole game never taking itself too seriously. This one is about having fun, and it works almost perfectly!

The one small complaint I have is that the setting, an abandoned fairground, is not used to much effect. The game teases the player with locations like a mirror maze, one of the classic settings of the abandoned-fairground-horror genre, which even would have been fun to see at least the monkey's reaction to, or how it would have affected the robot's sensors. Yet there is no way to enter it, just like most of the public attractions belonging to such a setting. Instead, more than half of the game is set in the tunnel system below. Also a good setting for a humorous/horror/science fiction game, but it should have been only a part of the whole picture. Which is actually the common complaint when it comes to very good games: more, please! 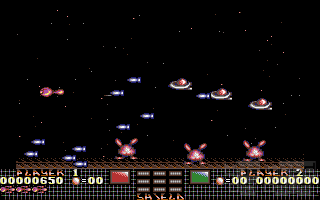