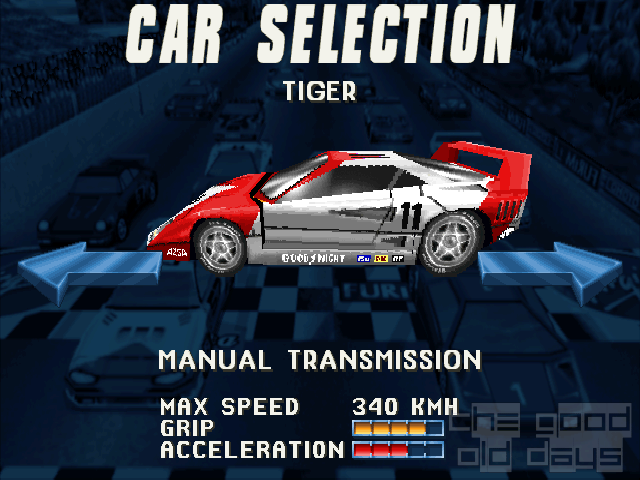 “3.. 2 .. 1 .. GO!” And right off the racers go with screaming tyres, tailgating each other eagerly to reach the lead position, which has to be defended at high speed. You snooze, you loose! With great care you have to worm your way past your opponents, while they try to slam you against the tunnel wall or slow you down by surrounding you from all sides. If you don't take care, you end up in the ditch real fast, where you have to struggle hard to reach up front again. Welcome to Screamer, one of the fastest racing games of the late nineties!

“You have to drive fast, to avoid coming last!” Screamer, the name says it all! With the exception of two courses you will almost always drive at top speed, drifting through curves, worming your way past the other drivers and steering victoriously towards the finishing line. It doesn't matter that the courses almost always resemble railroad tracks (the scenery is very limited and only one track has a shortcut), because there still is enough space for risky overtaking maneuvres. Besides: Back then this was the standard in the racing genre.

“Great Lap!” While “only” a total of 6 courses stand at your choice, their designs differ enough to offer some variety. From a rather simple round-course, to a beach promenade with long straights to a viciously winding, with slithering curves infested desert track: everything's there. The reportoire is extended by letting you drive those courses counterclockwise. And with the use of cheats even mirrored or upside down. The car selection is a little bit more generous, with a total of 6 base types each with manual or automatic transmission. Plus one bonus car, which can be earned by contesting in the league races (in three difficulties). This bonus car somewhat breaks ranks. And without spoiling all too much, it shall be noted, that it is absolutely worth to fight your way to the top, because it isn't just another paint job with slighty different driving behaviour.

“Indestructable!” If you are only interested in driving and you simply want to drive some laps, you will be spot-on with this game. While it isn't strictly necessary to discuss whether ramming walls at 342 km/h resulting in a funny 360°-spin (costing you only a few seconds to accelerate again) is especially realistic, some people have to agree that it can be quite refreshing if you only have to choose course and car, and off you go. No brooding over the right tyre type, no engine fine tuning. No, this will only put your driving skills to the test, only your cunning reflexes count. Faulty physics aside, Screamer offers enough challenges: You will learn the game real fast, but the level of difficulty of the later races, is nothing to be sneezed at and will challenge even veteran racing gamers.

“Look at that time!” Back when the game was released, the graphics were quite good, even if the lack of support for 3D-cards led to a high CPU load. Today, it looks like nothing to write home about, even though it has aged rather well. After all it runs rather smoothly and shows almost no hard edges and pixels in SVGA-mode. There are some objects besides the car which are animated, details at the side of the track like air planes, helicopters etc., which add a dynamic feel and atmosphere. Something which wasn't all that obvious back then, but is rather annoying today, is the slightly limited sight distance. The map at the bottom of the screen helps a little bit, but often enough, curves tend to appear out of nowhere. However after some pratice runs you should get an impression of how the courses run.

“Yee-Haw!” Concerning the sounds… well they are there. The monotonous humming of the engine (which even sounds the same for all cars) may get on your nerves, but it serves its purpose. There are some riffs from a electric guitar on the disc, which serve as background music. They offer nice dynamic vibes. Should you feel like something else, there even is an in-game CD-player (opened by pressing “p” while racing) which can be used to play your very own CDs (In my case that would be David Bowie's Outside, which I connect irrevocably with this game).

“Loooser!” One thing that will catch your ears immediately, will be the sometimes more, sometimes less annoying commentator, the friendly voiceover, which permanently used to criticize and/or praise your driving style. From stating the obvious (like “Put your pedal to the metal!”), to acknowledging skilled stunts with happy rejoicing to remarking on the fact that your little crash just cost you your victory: His jovially non-stop babbling adds a nice quirk to the game. You either like him for being so absurd that you can't help but smile, or you turn him off in the options menu (alltough this diminishes the games special charm). He is like a hyperactive co-driver, adding a lot of liveliness to the action. You also get something to focus your wrath upon, whenever you miss the first place by the millisecond.

“Wanna play dirty? Then let's play dirty…” A rather nice feature are the cheat codes, which can be entered from the main menu. They are surprisingly creative and exceed the usual “impossible to lose”. Partly they are rather sensible extensions to the gameplay (even so, that one has to wonder why they weren't put into the game in the first place). Besides rather obvious codes like stopping the clock (CLOCK), unlocking the bonus car and all tracks (VTELO and INVER), you can switch the traffic cones and boundaries with some rather peculiar stuff (MONTY and JOINT)… or you may face an all new challenge: Whoever knows the courses by heart, forward and backwards, may try the mirrored tracks (MIRRO) or even the upside-down variety (UPDOWN). But wait there ist more! The ultimate challenge: A race against a squad of bonus cars (ABURN). Even after unlocking said racer, this definitely isn't one of the most easiest things to do.

“Amazing! It must be real hard being this good!” To be honest: I find rating this game a rather difficult task. I admit that it's far from perfect, but still (for me) this game offers everything a good racing game is all about: Lightning fast cars, very accessible, lots of fun and challenging enough, so you can play it year after year and still find something that tempts you to try one more race. My definition of a good race in a computer game is as follows: Screamer – Lake Valley – Yankee – against a horde of bonus cars. Since all ratings tend to be rather subjective, I will ignore a wee bit of its shortcomings (like somewhat lacking scope, and that the graphics aren't all that crisp anymore) and award it a 5 out of 6. For making me gladly start it up year after year to drive some laps. If you don't like the genre or consider ultrarealism to be very important, you may subtract a point. You should try it anyhow… even if you only want to witness that pesky voiceover for yourself. 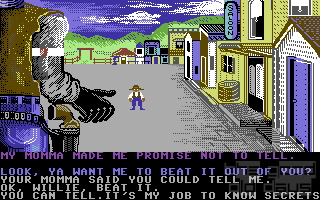