SpellCraft: Aspects of Valor
for PC 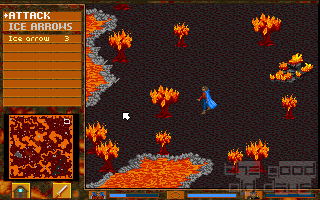 Get your spellbook ready, you are going to learn some serious magic. Soon you will be able to mix reagents, chant magical words and create spells to help yourself on the battlefield so, as per usual, you can save the world. Just that this time magic, and not just your sword, will be your main weapon.

A work by Ybarra, some of you may find that Basque surname familiar. No surprise, it's the name of a well known mayonnaise brand. But also you may know it from being a big videogame designer, having worked on games such as M.U.L.E., The Bard's Tale or, the one that tome is his best, Alien Legacy.

All of them are, in a way or another, attempt to mix ideas and genres trying to create something unique. Using Alien Legacy as an example, you get a strategy game where exploration and plot are just as important as developing your cities.

Just that this time the chosen mix was the easiest: RPG and action, along a bit of strategy that never gets along with the rest of the game. It's not like this can't give good results, after all RPGs come from strategy games, just that here things never hit the right spot.

For starters the magic, which is the main point of the game, is a nuisance. To create spells you create a combination of four set reagents and one of several focus. Think about all that could go wrong here, and chances are all those problems are on the game.

The first of all, the question everybody asks himself just by playing through the tutorial. How the hell am I supposed to develop new spells? Not only the possible combinations are too many, but if you don't make one of the right recipes the game punishes you in the cheapest possible way, by killing you.

And no, the tips you are given don't even help. Even in the tutorial you reach a point where you are told to create a new spell, like that, create a new spell. How? Well, you should know, but the clue is that the recipe can be easily found on the manual.

I think the mentor meant it can be easily found on a guide. Otherwise, how could I find out the correct amounts were hidden as the book, chapter and verse numbers of a citation somewhere around the nearly 80 pages manual? Doesn't look as simple to me, maybe it's that I'm not bright and patient enough for being a mage.

And no, having to include a cheat sheet with your game doesn't mean the system works as intended, because with the game came a table showing the recipes for most of the spells nearly completed, each having just a few gaps for you to fill. That tells a lot of what they thought of their game.

That's the backbone of the game, but not all it offers. It's just that the rest is not better. Fighting is a mess, and you can easily get stuck on the enemy and unable to draw the sword, so the monster beats you to a pulp. Traveling to the elemental planes is boring, because it’s always the same. And the characters are little more than shops.

So this ends being a forgettable experience. The idea of mixing and creating spells is not bad per se, but the way it's all done doesn't work in any way.

Mr Creosote (2012-11-24):
This game could have been great if it had actually been about experimenting with spell ingredients to create new and possibly unexpected effects, in the same vein as the tiny genre of species mutation/evolution tried with life forms. When it turned out to be a stupid exercise in repetive ingredient collection tasks and tedious cooking lessons which explicitly forbid any experimentation, I was thouroughly disappointed.
Herr M. (2012-11-24):