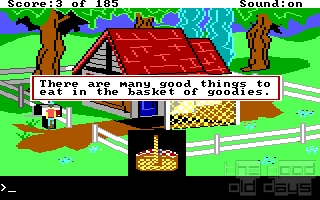 With the incredible success of King's Quest 1, it didn't take long for Sierra Online, directed by co-owner Roberta Williams, to release a sequel. Just a year after releasing KQ1, KQ2: Romancing the Throne, was released. However, it didn't receive the praise that the original obtained. Many people felt that the game was too short, the story to simplistic and the characters had no development. Some thought it was just a quickly slapped together game that lacked any real depth or good story telling.

And for the most part, they were right. Roberta admitted in an early interview, that the original KQ2 was just built to show new programmers how to program using there new programming interpreter of the time. She later decided to turn it into a full game, then release it. So no real thought went into the story and character development. She also blamed its simplicity on the limited functions of a PC and how little data could be put onto the disks at the time.

However, despite the limitations and complaints, the game did very well in the market place. Between KQ1 & KQ2, more than 500,000 games were sold. This was un-heard of for a computer game, considering it was rare to have a computer in every home like today.

With the success of these games, more companies decided to release games for the home computers. Consumers had a lot more games to choose from. This also helped the sales of PCs, creating a lot of competition in the marketplace. No longer was IBM king of the mountain.

As for my opinion, I love the game. I actually enjoyed it more than KQ1. I was drawn in right away and I liked the faster pace that it offered. Less just wandering around trying to find some random object you'd have to figure out the purpose for later. Yes it still had it, but it wasn't as bad and so boringly drawn out. My favorite part is confronting Dracula in his forboding castle. There were more places to visit. More characters to interact with. You didn't feel like you were out in the middle of a jungle, trying to find something to do to keep the game progressing.