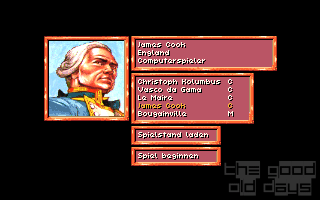 The strategic business simulation Christoph Kolumbus was published in February 1994 by “Software 2000” on the PC and the Amiga. On the Internet, the game is sometimes called a clone of The Patrician, because it was designed by Martin Wölk who was also involved in said other game. I see more parallels with the Amiga/C64 game Spoils of War from the year 1992, though, because the game is about discovering surrounding islands from one's home base, settle and develop them, but selling goods and building new ships or military units is only possible in the home base. A free form of trade like in The Patrician where you can buy and sell goods whereever you want is not possible, you can only trade at your home harbour.

Beginning a new game of Christoph Kolumbus, you can select which of the five European powers, Spain, Portugal, the Netherlands, England and France, should participate in the game and which of them should be taken over by a player or the computer. Multiplayer is restricted to 'hot seat', i.e. the players take their turns one after another. A network mode (like for example in Magic of Endoria) does not exist, presumably because in 1994, playing via network was still pretty new.

After these initial choices, you are assigned command over a caravel and an office with 15,000 doubloons. You now have to equip the caravel. You buy rusk, water and about 20 units of shiny, worthless goods and hire a crew. At the bank, you can also shift further doubloons to the ship itself. It is still useful to keep a couple of doubloons in the office in order to be able to restock rusk and water later. Cannons, gunpowder and cannonballs as well as cloth and wood are not important right away, because you first have to build up your economy and you will need each doubloon for that. It is even smart not to max out the capacity of 100 men on a caravel. If rusk or water runs out on the voyage, your ship is lost and therefore the game, too.

Once you hit land, you can set off an expedition or first explore the coast line with your ship. Unlike in Spoils of War, you cannot found a settlement at a random spot on the map – you have to locate a native village, found a mission there and extend it to a settlement.

If you have found a native village, you can trade with it or simply conquer it. If you trade, the village chief will demand a certain amount of goods – usually around 16t – and in return, he will allow the construction of a mission. Alternatively, you can conquer the village – this method is less advisable, though, because then, the mission will not have any inhabitants anymore. Altough you can pull the surviving expedition members onto the mission, the settlement will then grow only very slowly. Also, the church will be quite displease – after all, it is your mission to convert the natives to Christianity.

After founding the mission you should pull a second expedition equipped with doubloons onto the settlement in order to build a plantation. Plantations are best placed in the vicinity of a river. Alternatively, grass land is also a good spot. Because running plantations and mines requires many workers, you should transport the goods produces in the settlement to your home harbour and sell them there so that on the way back, you can bring more men to the settlement. This is where a first negative observation becomes noticeable. The exchange of goods between a ship and a settlement always requires the tedious formation of an expedition which you can equip with the goods to be transported and which you can then pull from source to target. This is the only way, even if there is a port in the settlement and ships can enter it. This could have been done differently, especially since there is already a dedicated city screen for the home harbour. This way, you first have to confirm how much space is available at the target and then have at least one man accompany the transport.

In the further course of the game, you first build up the production capacity of your first settlement, buy more ships and subsequently colonise more native villages. If you encounter an enemy settlement and if your expedition counts more than 100 men, you might even be able to conquer it without any regular troops. This only works for small missions (0 – 100 inhabitants) and sometimes for small settlements (100 – 500 inhabitants), though. Larger settlements, forts, colonial ports or even an opponent's home harbour can only be conquered with several armies. In combat, hit units quickly flash and lose men, or hit points in the case of ships. The loser is removed from the map permanently. So this is a fairly unspectacular affair which cannot compete even remotely with the battles in Spoils of War.

The technical implementation quality of the gameplay is only mediocre, unfortunately. The game has got a couple of bugs which hinder the fun. For example, ships will be haunted by the plague, but instead of losing men, there is an increase. For example, I had an 800 men galeon suddenly carrying 1134 men. The greatest annoyance in a multiplayer game must be the soldier cheat, though. If you pull a soldier onto an expedition, the soldier will remain where he was – but underneath the expedition, a soldier clone will appear. This is most handy when you want to quickly conquer an enemy settlement – just hire one soldier, clone him repeatedly and poof, there is your army. This way, even conquering an opponent's home base is only a question of time.

Christoph Kolumbus is an interesting game which definitely has its merits. In the advanced stages of the game, it is too easy to lose overview, though. Although there is a large map which will give the rough directions towards your home base and highlight enemy settlements, it is still not very useful. The amount of information found in the office is also somewhat lacking. All you will find is an overall view of your belongings, but nothing about specific about ships, settlements or land units. Still, the game is worth playing. You best come to your own conclusions.

Jemsnixon:
I nearly missed it. Still cool, but not quite as excellent as Patrician.
Korondor:
Feel free to share anything about Christoph Kolumbus (1994) here!
[Reply] 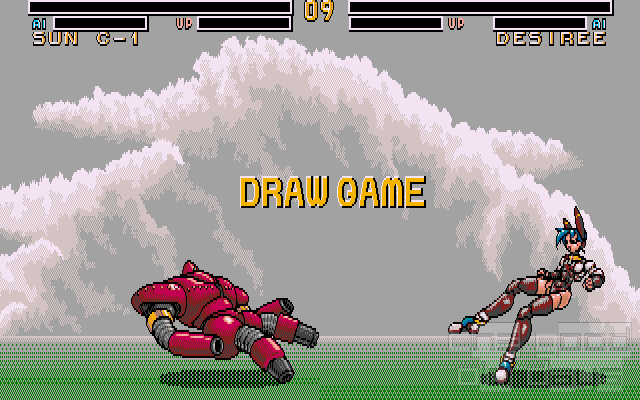