Kingdoms of England II, Vikings: Fields of Conquest
for Amiga 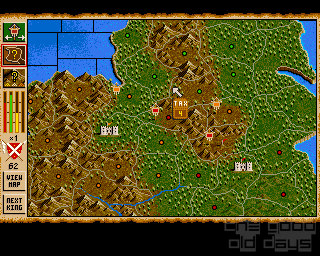 [Wandrell] Strategy is as old as tabletop games, but that doesn't mean it's a mastered genre. Creating something which is at the same time fun and strategically hard, and while it may seem that a conquest based game would be the simplest way to create one of these games, don't judge a book by its cover. There is more to strategy than moving armies around to fight enemy lords.

[Mr Creosote] Is there? The game we're discussing today, Vikings: Fields of Conquest, might make you believe there isn't. It's the basic scenario of warring lords trying to achieve dominion over medieval England which, to be honest, has been done to death in previous games.

A game designed for strategy?

[Wandrell] Well, I like to think the game added a bit more. It may be in a little bit, but still it forces you to choose which land to attack first, first due to the constant need of resources, second because not all regions are equally defended. Sadly, it fails in the second part due to the lack of any kind explorers or similar way to check you neighbours.

[Mr Creosote] So this game adds some rudimentary economy to the usual concept of just assembling your army and sending it out to beat your opponents to pulp. Alright, acknowledged. Nevertheless, we are talking about a map of almost 200 provinces, so resources are hardly scarce (which would have made this aspect much more interesting).

[Wandrell] The resources you'll need are nothing surprising: gold, food, wood, stone and iron. Stone can be produced naturally, or you may need to search for it, but iron is harder to find, and it only seems to appear on the mountains, making them a priority.

[Mr Creosote] Natural resources and taxes are then used to raise more armies. You know the drill. Where it could have gotten interesting as well is the number of different unit types.

[Wandrell] Actually I think there are way too many units. You can suppose which use some of them have, there are pikemen and horsemen, or catapults and fortresses, but not all units seem to have a clear “enemy”, and nothing will tell you exactly which benefit and drawback these units have. But overdependency on the manual was normal back then.

[Mr Creosote] That's why I said it could have been interesting. In practice, there is little consequence to the imagined differences between a knight, a mounted knight and a “champion”. The only unit which has a clear distinction from the others is the catapults which are necessary to storm fortresses.

[Wandrell] Not that you will be making many sieges. Most of the time you battle to take lands under you lordship, which means battling peasants and some enemy soldiers. Battling is simple, just order your armies to move around until they arrive at a territory you don't control and then, as you finish the turn or just when you order them to start, battles take place. Your options during these are limited to retreating or stopping troops from taking part on the battle, but no matter the options the result ends feeling too random.

[Mr Creosote] Actually, this is where I see a positive aspect in the game: You can choose to resolve battles during your turn instead of having them all calculated in one go at the very end. This means that you can still react to a battle's results within the same turn. That's not a bad idea!

[Wandrell] Still, sending the first party is always a risk. You don't know what they'll meet as you lack any clear information of your neighbours, and so the first attack is always a gamble, giving the feeling of battles being even more random.

The way units work feel random, the enemy armies composition feel random, and then you also add more ramdomness to the pre-battle decisions? Well, for a strategy game it feels like a poor decision.

[Mr Creosote] Hmm… in my opinion, it makes the whole planning stage much less random, actually. I maintain that due to the ability to have individual battle calculated in the middle of the turn, you don't have to send a huge army at once, but you can first have a small scout unit soften the enemy up and then send in another, more serious army in the same turn.

It may be less 'realistic' in the way that actions which are supposed to take place simultaneously can be committed in sequence, but it does allow for finer control of what is happening. Again, unrealistic (since the game actually does measure the 'action points' of each army in the amount of days something takes to carry out), but very handy.

[Wandrell] Still, this all is going to a point. Well, to two points, but they are connected. First, as I said, the game lacks a good way for the player to know the size of the armies you will meet. This is one of the things I dislike, as you have to jump blindly to the enemy.

The second point is the important one. This game lacks a bigger strategy element, something that would help you shape the decisions you will make, being able to choose which lands are more risky and which ones are more valuable.

[Mr Creosote] On the second point, I can agree. Although certain land types have better 'intrinsic' defense factors and you can build castles for even better defense, there is really little point in actually even trying to build up a fortified border. The game rewards purely offensive play, i.e. when you can grab a province, you definitely should.

[Wandrell] In the end, battles end being the typical border pushing against AI, until one of the two is too tired to keep going.

[Mr Creosote] What I'm missing quite a lot in the game is serious diplomacy. There are several lords all over the map, but there is no real way to ally with anyone or even just agree on a temporary peace while occupying your armies elsewhere. You're really fighting on all fronts constantly.

[Wandrell] That again goes into the lack of a greater strategy element. But this time I think the problem comes from the game being intended as a multiplayer game, so you would have to discuss diplomacy with the other players (as if these things ever worked well).

[Mr Creosote] Possible, because only then, the game aspect of the Viking marauders posing an additional threat to the native English lords would actually make sense, because with just AI opponents, there is really no difference between the two.

[Wandrell] Also resources would take a bigger role. The enemy AI just ignores all the constraints the player suffers, with the excuse of them being just Viking warlords which only need lands to pay all the troops they want, while you have to raise troops from a slowly growing number of peasants.

[Mr Creosote] Much of this can be explained in one way: The game is supposedly aimed at 'casual' players who would not touch more complex wargames as they had been very typical in the 1980s. So everything has been simplified quite a bit.

[Wandrell] That's actually the biggest point of the game. As you have seen, once you sit and play for a time the problems start popping up. But the first time you start the game things couldn't be smoother: using a simple mouse control system, pop-up icons and neat windows it's very easy to learn the ropes of the game.

[Mr Creosote] It's certainly easy to just get going. The icons are clear, most functions can be discovered by experimentation as opposed to wading through a thick manual. This puts Vikings in a certain tradition, of course…

A sub-genre in search of accessibility

[Wandrell] Fighting for Britain is nothing new, people has been doing it for centuries. And so, it's not surprising that very similar games already exist. Just look at Defender of the Crown. Where you fight the evil Normans as a good Saxon on a strangely familiar fashion.

[Mr Creosote] Indeed, I would say Vikings owes a lot to that game. In the mid-80s, a simplistic wargame without 1000 rules to consider and without a particularly complicated input method was virtually unheard of. Defender of the Crown was a brave experiment, but once people got over the amazement of staring at the gorgeous graphics, frustration over the severely limited gameplay set in. Vikings does not even have those graphics and it also does not have the at least somewhat entertaining arcade scenes.

[Wandrell] Albeit with its limitations, it was a nice formula that others would try to imitate. You have for example King Arthur's K.O.R.T., which is just the same, except because this time you are a honorable British knight. Again, the biggest achievement in the game was the interface, which no doubt is the biggest point of this sub-genre, it's hard to find another game where, with a single gaze, you could quickly know how things are faring.

[Mr Creosote] Of course, the question is always how far to dumb it down. We may not think much of this game's strategic level, but at least it is basically sound – unlike DotC which is a total joke in that respect.

What Vikings should have done is to go further into the direction of only using military power as a final means of decision between the lords, but use its economic system as the actual basis of success. That would have made it feel much fresher compared to the competition. A formula which Lords of the Realm would do quite successfully hardly two years later.

[Wandrell] What this game manages to be is a simple game, fast to start, but which as you keep playing becomes duller and more monotonous. Maybe the multiplayer option would improve all this, but I doubt that it would manage to do so by much.

[Mr Creosote] During that time, developers hardly ever seemed to distinguish between the two axes of simplification: interface/player support and rules/depth. It would be possible to make a game which tackles the former without dumbing down the latter, but unfortunately, hardly anyone ever tried it. It was usually both or none – as in the case of Vikings.

[Wandrell] It's a delicate balance, still, compare it to Machiavelli the Prince, which goes the other way. First economy, second strategy, and I think it got closer to solving the problem of creating a more “casual” strategy game, albeit one year later for the first version, and three for the enhanced one.

[Mr Creosote] Vikings certainly was a worthy attempt, even if I believe it was ultimately unsuccessful. I recommend it with caution, but please don't expect any longevity! 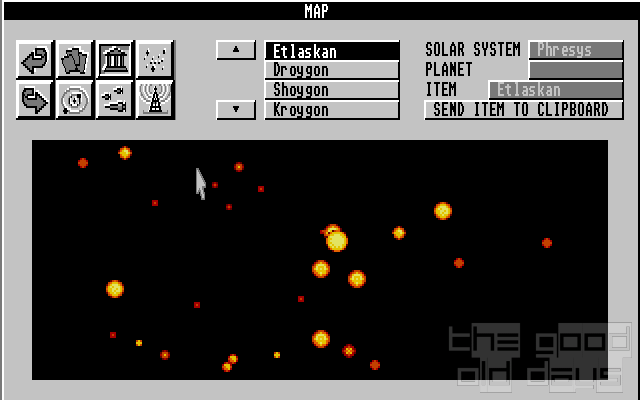