Ski or Die
for PC (DOS)
Also available for: C64 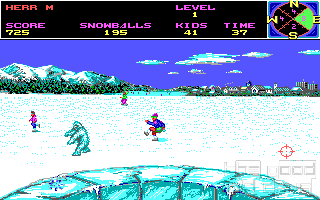 Let's be honest: There are heaps (almost mountains) of winter sports games, and most of them are downhill or slalom races, which play like yet another racing game, in which they simply replaced the car sprite with a ski racer sprite. Actually there might be nothing wrong about it , but to those, who always wished for a more original approach to the alternative winter extreme sports, I want to heartily recommend 'Ski or Die'. There you have to compete in five unusual disciplines (from snowball fight to inner-tube racing) against clock, man and high-score and attempt to make the best impression on the snow fields.

Entrenched in an fortress of ice, armed with an arsenal of a whopping 200 snow balls, you have to endure a siege by nineties teens (clearly recognizable by their tasteless neon coloured anoraks). Expect no relief troops! Your time is getting short: You are about to face severe frostbite. From time to time somewhat unexpected visitors stumble unto the battle field. But show no mercy, for they are worth a great deal of bonus points.

In this mini game, the real strength of 'Ski or Die' is already apparent: the variety. Where other winter sports games may occasionally offer shooter-like disciplines in a biathlon (and even then only as a test of reaction time or reflexes), here you settle your score with actual crosshairs and vibrant booming from your speakers! Still you won't miss out on the humor: Once in a while an opponent peeks over your ice wall. His facial expression knows how to arouse a good deal of schadenfreude, whenever you administer a snow ball to him. Not to mention the bunch of rather odd fellows that got lost in the snow.

You just jumped out of a helicopter, now you crash at full speed into deep snow. Your imprint in the snow, a nice silhouette, soon stays behind, because you have to race downhill as quickly and dexterously as possible. Hazardous jumps over chasms and ski lodges yield points, and should you cross the finishing line in under two minutes you gain a lot of bonus points.

The one thing about this part that I always notice first are the controls: That is, against my intuition they are reversed. When you push right, the skier actually goes right on the screen, but from his point of view to the left. Perhaps other gamers don't feel that way, and you probably could write fascinating psychology papers about the 'Why?', but it has cost me one or the other high score, whenever it happened to me in a crucial moment.

But as soon as you get used to it, this dash through the snow surely is a lot of fun. You can't make big mistakes, because after a crash you are just placed on the course again (though sometimes at a disadvantageous position). You aren't in a hurry, either, because the race simply continues after exceeding the aforementioned two minutes. So you aren't punished for incompetent racing, but rewarded for skilled maneuvering. And in my opinion that's exactly how it should be.

Jump now! Whoever wants to have the very reassuring judges award them more than a measly 2.0, should combine stylish somersaults, twists and splits. It goes without saying that you should do this without crashing head down first into the snow. While a basic somersault often is relatively easy, a combo with a second one tends to be a little bit trickier. And the chance for a score of 9+ is slim, unless you do it with style and perhaps with one or the other quick split in between.

Basically done well, I find this discipline somewhat lacking, because it offers no real highlights. Furthermore you will learn the best combinations really fast and then it is only a matter of luck and routine to earn the top marks. Well, I have to admit that I might be a bad judge in this case, because my sisters always used to beat me at acro aerials.

Another race? This time simply with inner tubes? Against a second feeble tube-trooper? Far from it, because essentially more important than coming first is deflating the oppponent's tyre. Whether by pushing him into traps, or by pricking his tube with a knife, dart or fishing hook or by driving him over the precipice: the meaner the better! Tumbling around after a collision, glazed frost and decreasing control with dropping tyre pressure provide extra excitement.

While the AI-opponent is a little bit on the weak side (his attacks are slow and random), this discipline shines when played against human opponents who know how to strike back seriously. This might be the case, because unfortunately this is the only one where you can compete directly against another player.

Welcome to the craziest half pipe of computer gaming history: A dead straight endless route with ocassional bumps in it. Not strange enough? Well how about a couple of logs? Or punkuins (penguins with neon pink mohawks)? Or chain saw wielding rabbits? Seeing that, the judge with his smart pink ear muffs and half witty comments appears to be comparatively dull.

You score by doing risky jumps. You get two minutes to make as much as possible, but they also require variety: Whoever thinks endless repetition of the same old stunt is a great idea won't score all that many points. While the first few stunts are easy, there are some tricks which require a lot of practice. And that keeps up the long-term motivation.

Back then (in the early 90s), this was a very CPU-friendly game which ran somewhat smoothly even on older DOS-PCs (286). The EGA graphics were used with great skill, so that you will hardly notice the limited colour palette. Concerning the sound system, at least AdLib is supported, which in any case sounds a lot better than the PC beeper, whose cheeping is ultra high frequent at that (a good example would be 'Downhill Blitz': seems to have no sound below 10,000 Hz). You can either control the game by keyboard (cursor-keys, return and shift) or by joystick. Up to six players can compete against each other, although with the exception of one discipline only in a hotseat mode. There also is a practice mode, whose purpose is beyond me, for there is almost no difference ('Snowball Blast' shows a freezing character instead of a timer) to the normal competition… except that you don't get listed in the high score.

In my opinion there are three points, that make 'Ski or Die' one of the best winter sport games: Firstly, it is very user friendly. You get a knack for it really fast and you can score the first successes pretty soon. Yet it provides challenges enough, if you are eager to reach a real high score. Secondly, it offers some variety. No concept is recycled, the mini games differ strongly from each other and you won't find some of the games anywhere else. And thirdly, it has a great sense of humor. The many small details hidden in the snow, really freaky characters (although by now, some of their comments are really old fashioned… which is kind of entertaining in itself

) and the crazy game concepts are entertaining for sure.

Being fun for an occasional romp in the snow, I award 'Ski or Die' 4 out of 6 neon pink anoraks.

PS: On a strange side note, one of the things I noticed for the first time while play-testing today for the review, is the product placement, which is practised rather blatantly. Whether the snow board manufacturer benefitted from it or not is another story, but it shows that this kind of advertisment in computer games is far older than you might tend to believe.