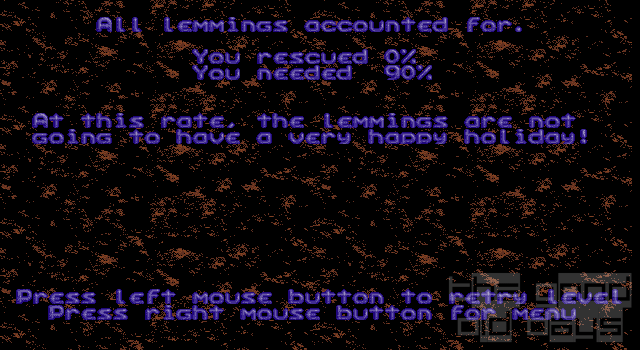 Who trudges there through snow and night?
It is the lemmings! Clad red and white?
Where is the fuzzy green haired mop?
What are they wearing on their top?
A warming hat that is of course,
a gift from good old Santa Claus!
They are abroad on Christmas eve?
Well, this is what they did conceive:
By stumble, fall and clumsy sway
they want to thrill your holiday.
Once through the exit they should come
it's "Merry Christmas, everyone!"

Sometimes the simplest ideas are the best ones! At the end of 1991, in order to promote their just recently released game Lemmings, DMA Design and Psygnosis crafted a demo with a special variation: They equipped their green-blue guys with festive gear, added some snow here and there and sampled a bundle of well known Christmas classics as new background musics. Along with some merry Christmas greetings they gave it away as "Christmas Lemmings" (or "Holiday Lemmings" in America). The small number of two brand new Christmas levels and two taken from "Oh No! More Lemmings" was somewhat modest, but in the end it was only a demo.

A demo which showed big success: A new version came out just one year later, and consisted of four yet all new Christmas level. And the next two years actually both saw a full game, which offered 32 levels each, split in two levels of difficulty. On the other hand they weren't freeware anymore. Still the 1993 version was later included in the 1994 version and was made freely available for promotional purposes. Altogether 70 lemmings winter wonderlands in 4 games were created. Through these you had to lead your swarming horde by the hand, just like in the great original.

For those of you, who never heard of the lemmings, I will roughly outline the gameplay: The eponymous creatures drop from a trap door into the level, to dutifully start wandering straight ahead, until the player tells them to do something else. Their blind trust is getting to the point, where they wander into abysses, stumble into traps or get stuck between two boulders. In order to prevent those calamities you get a limited supply of commands (like "dig", "build a bridge", "climb", etc.). Your aim should be to move them to the exit, where they will dive into the next level while shouting a lively "Yippee!". Your grey matter as well as your reflexes will be put to a thorough test.

The Christmas version doesn't change all that much. Technically speaking the changes are rather superficial. And yet, or just because of that, it works so perfectly well. The things that didn't need an upgrade anyway, were left unchanged: the gameplay remains as brilliant as ever. The things that were excellent already, even have been improved: "Lemmings" had graphics which were (at least for the PC) way ahead of it's time, and the winter theme together with the jolly Christmas tunes convey a festive cosy mood. On top of that, the games (or at least the first ones) where Christmas gifts by the developers for the fans, which is a sign of appreciation not to be underestimated.

All in all I think that "Christmas Lemmings" is a very excellent variation of a solid game. The only weakness I can think of, probably is it's slightly lacking content. But you never can get enough of a good thing.

Umm… read the review? The naming issue is addressed in the first paragraph following the poem.

Once the screenshots show up again, you will also be able to see it on the very first one: Xmas Lemmings.