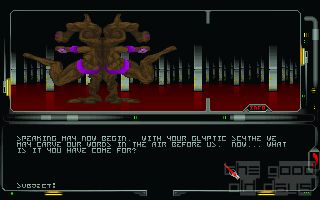 Thousands of humand minds fled from Mars. Transformed in raw data by the theological dictatorship they stole a ship and did the forbidden, travelled to the stars. But they ended stranded, and nobody knows how long they have been like this, sleeping until the computer remembers to wake them up, only to find just seven of them are alive, with no place to call home.

All there is left is exploring the planets, meeting aliens and discovering a new purpose. Of course this means finding a growing menace to sentient life and creating an alliance capable of stopping it, but you will be so busy exploring the huge amount of star systems that you will feel like some sort of research vessel.

Most of this research is done just going to the planet and throwing a bunch of probes, they will gather all the possible info on the planet, then engineering will be able to mine the planet and try to find out the use of alien artifacts or unknown materials you may find. Still, the real backbone of research is completely passive, as it consists on setting your crew on research mode and seeing how, from time to time, they get a new level, bringing new blueprints to engineering.

This crew consist of six members plus you, the captain. They handle the six systems of the ship: psychometry, which is in charge of communications, both with aliens and with your crewmen, but also makes sure they don't sink into madness. Engineering, in charge of building and deconstructing, along mining. Science, which controls the probes sent to planets. Security, who loves ship to ship combat. Astronavigation, taking care of the workings of space travel. And medicine, a job which consists mostly of making back-ups of your people, as there are no living persons aboard the ship.

Yes, I repeat it, there are no actual humans on the ship, but copies of their minds. There are some heavy transhumanist tones on the plot, and each of your crewmembers have been digitalized for several reasons (mostly for being enemies of the system and/or reducing mass on the ship), so they exist in a philosophical limbo where they are not sure if they are alive or not. It's nice that you can actually talk with them about this topic, but it also affects the gameplay, as you can configure their mood, or see how, when things go bad, they lose the only thing they have left: their sanity.

Usually this kind of science fiction takes is a weird one. First of all unlike the usual it is SF where the religion takes a central point. Or you could say it take the idea of science being the future religion to it's extremes. In the game the characters flee from a theocracy where everybody is synthetic in one way or another, yet fully synthetic beings are considered soulless, and they end in a galaxy where all the species use technological modifications in an attempt to reach a higher level of existence.

Actually all this background plot is the best part of the game, and shows an universe where nobody is completely good or bad, and where the flesh beings breed with the machines while the machine beings want to get a soul.

Sadly otherwise the game is lacking. The randomly created systems end being always the same, there are lots of clearly unfinished features, and the game mechanics themselves are even more repetitive than the planets. Still, it has the weird relaxing quality some SF games have, and the patches made by the game's author, several years later, improve the game a huge deal (just try to talk with your crew before and after the patch).

Still, it's missing something, it's a somewhat buggy unfinished game. And this is sad, because if it were complete this would have become one of the classics.

Wandrell:
Feel free to share anything about Ironseed (1994) here!
[Reply] 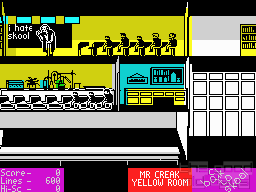