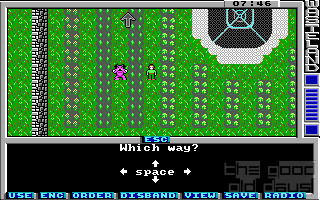 The USA is now a radiated wasteland, home to mutants and dangerous survivalists. A dog eat dog world, and only one thing can keep a semblance of order: the Rangers. You, of course, are a member of this elite group, and your job is out there, on the wastes, where there is always somebody in need.

You are going to meet one of the forefathers of RPGs, and albeit this gives it a bit of personal carisma sadly it also has a problem I don't usually get with these games: it feels primitive, a prototipe, a test for what RPGs would become.

Not that it's clunky, on the contrary, the interface is clear, and many games to follow would learn from it. Of course, it was also working on what already existed, taking what could be seen in games such the Wizardry or Ultima series. Still, it adds a bit of it's own, including things suchs as skills to interact with the world, or the option to create macros, making complex actions easier to handle.

Thanks to that, the core of the game is well designed. Even the quests, in their simplicity, are nicely done and the combats, which take a big part of the game, are fun, including enemies showing the usual weirdness in post-apocalyptic worlds, and in the end the game is easy to enjoy. But still there is one thing that makes the game feel imperfect, the lack of feedback, the game doesn't know how to tell you things.

Just look at any attempt at a plot, like in the quest where you feel constantly lost, never knowing exactly what you have stumbled into, and suddenly solving an adventure, not always in the best way, without any kind of warning. This could have been done just with better texts, and the problem is not memory, as most of them are on the paragraphs book.

But apart from that, and a few problems with objects I don't know what they are for (if they actually have any use), or that I'm unable to use, the game is not bad, just that you need some kind of guide from time to time to avoid getting lost.

It's a problem from it's time. Actually the two years younger Pool of Radiance is the same, a great game where suddenly some attempt at a plot appeared from nowhere, leaving you utterly confused at was going on.

Still, if you are playing this game is not because it's the best of it's kind, but because it was landmark. It's a fully open game, from the beginning you can go anywhere you please, with lots of places to explore and secrets to find, giving you lots of adventures in a charming world (in the horrible-deadly-radiated-desert sense) and which allows itself to be played with ease. Just don't forget that cluebook.

Wandrell:
Feel free to share anything about Wasteland (1988) here!
[Reply] 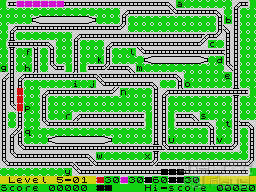