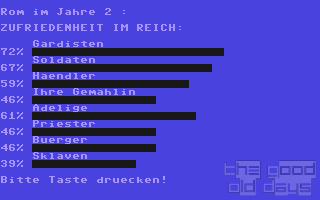 Along with Kaiser, this game defined the 'ruler-genre' for years to come! The premise is simple: make your country strong and stable inwards to conquer your neighbours.

Fitting the name, Imperator is set in ancient Rome. Your main job is to distribute the budget amongst several groups of interest. Every year, they demand a certain sum and it's up to you whether to comply fully, partly or not at all. That influences this group's stance towards you. If you give your wife (!) only half the amount she wanted, she'll be more likely to start a rebellion. On the other hand, if you provide the merchants with even more money than they said, they'll love you!

There are more factors which influence your popularity though. First of all, you can use your remaining budget to build certain structures like a new temple (raises popularity with the church) or build more troops. And then there are special events. From time to time, you - being the highest judge of your country - have to decide on court cases. These are easily constructed, it's always very clear which decision will increase and lower your popularity with whom.

As easy all this sounds individually, balancing these measures is hard enough! Especially since you have even more to do: evil Christians and pirates are cutting your income by robbing your tax collectors and attacking your merchant fleet! Against each threat, you can raise special units: elite guards to throw the Christians to the lions (erm.... yeah....) and a war fleet against the pirates.

And then there is of course the fight against the other countries. In each turn, you have the choice to attack a randomly chosen country or not. If you succeed, your glorious armies return with gold and slaves and your realm has grown in size! The ultimate goal is to rule the world of course.

To all this, a bit more economy is added, and Imperator presents it in a light and tasty mixture. The game texts are written with a great ironic edge. That makes even uproars, riots and revolutions (i.e. losing the game) fun! And whoever had the idea to include the player's wife into the budget calculations has to have a completely twisted mind

Imperator gets boring at some point though. Once you've seen it all, read all the texts, it has just lost its main motivation. Single players will find themselves losing on purpose again and again just to get different endings! As a multiplayer game (up to five rulers), it's a lot better though - then it gets really exciting once the war against each other starts...

Mr Creosote:
Here is a recent article about the author of Imperator: http://m.spiegel.de/karriere/berufsleben/a-899120.html. Apparently, he is a member of the Giga Society, a club of people above the IQ of 196.
Mr Creosote:
Feel free to share anything about Imperator (1983) here!
[Reply] 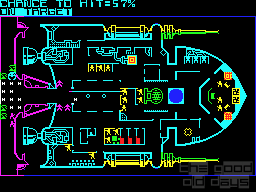