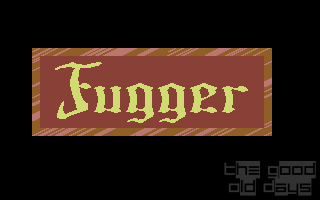 Although they originally grew tremendously rich through trade, the Fugger family would not be remembered today if it weren't for the way it used its wealth: As creditors of the German royalty, their political influence went as high as the emperor himself. Just a couple of hundred years later, the then thriving home computer market encouraged many young people to learn programming and make games themselves – the age of the bedroom developer unshackled by corporate interests. The parallels should be obvious… 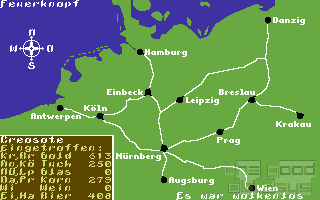 Goods coming in from all over central Europe
Or maybe there aren't really any? Let's just say that this game, which takes the medieval merchant classes rise to power as its theme, has got an interesting history, too. Originally submitted to a computer games magazine for their homebrew corner, the game received very good reviews. It garnered quite a following so that it was later picked up and professionally marketed by a real publisher.

The game begins in the year 1500, with the birth of Karl of the house of Habsburg. As we all know, this boy would become not only German emperor, but Spanish king as well, making him one of the first truly worldwide rulers. At that time, the players (up to six can participate) are still small-time merchants. Every year (turn), they send their carts to their factories to retrieve produced goods which can then be sold. But beware – obviously, the prices rise and fall, and the workers will demand their wages anyway.

While making a profit is quite simple, the ultimate goal is to rise in Karl's favour before the others do. In fact, this is the only thing which makes for a challenge at all. The economic system is ultra-simplistic: Each city is good for a certain commodity, the more workers you hire, the more will be produced and of course, producing more than you can transport or store is not a good idea. Also keep in mind that storage space is the not-so-secret bonus commodity which can bring a nice extra profit as well. 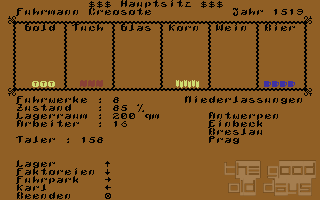 Your centre of operations
The thing is that this simplicity makes Fugger a fairly boring game to play on your own. Although the economic model is solid, it is all too transparent; there is absolutely no challenge, even the random events don't really bring any excitement into the game. Profit grows exponentionally for obvious reasons and the sums to make Karl happy are not all that hard to make before the game ends in the player's inevitable death.

However, the game manages to shine as soon as more than one person sits down in front of the screen. It manages to do so by tackling a genre inherent issue which plagues so many of its competitors: The question of whether a game feels more like the players are actually playing with/against each other or whether they are just playing in parallel.

What is it a trading game usually consists of? Buying cheap goods in one place and selling them somewhere else for a profit. Whether somebody else is doing the same thing at the same time, even if this supposedly takes place in the same world, does not really affect anyone; the intended competitors are playing just like they would in a single-player session and the only way to gauge their relative success (because more often than not, they are all successful) is the size of their profits, i.e. a comparison of purely abstract numbers. 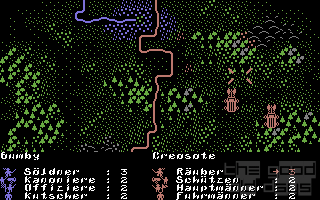 Ambush!
Fugger offers more than this by not only giving all the players the same goal (whoever reaches the highest status with the emperor can be considered the winner), but it also allows actual interaction between them. In fact, many game features are not even available in single-player mode. For example, there is quite an extensive sideline about hiring crooks to ambush your competitors' carts (who, in turn, can hire mercenaries to defend themselves) which is actually fought out in a simplistic tactical sub-game. Bribes suddenly begin to make sense as well if there are other players. And so on.

In this respect, Fugger is an excellent social game, as it is based on the spirit of competition and schadenfreude: Delivering a major blow to your competitor or just her having some bad luck can lead to a lot of evil fun. On the other hand, simply watching your financial numbers grow is a fairly dry affair, especially since the game does not even offer to take over any of the routine tasks for the players; in spite of the very good controls which make these things quite easy, this is therefore not a recommendable game without a couple of friends joining in (the rating reflects operation in multiplayer mode, as it is undoubtedly primarily intended to be played). Though convincing some people to join in should be relatively easy at least – the game is a fairly quick one in every respect: quick to learn, quick to master and quick to finish. Single-player practice, thankfully, isn't really needed anyway. In any case, it is good to see someone trying to do something different in the trading genre, to give it some purpose. Even just for that alone, Fugger already deserves a lot of credit.