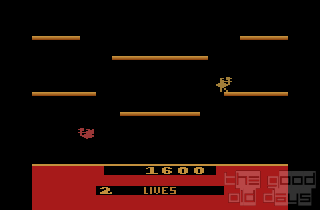 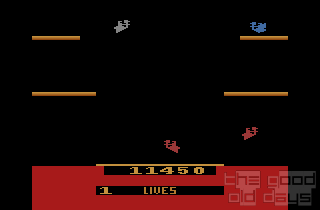 That's as colourful as it gets
The basic idea of flapping one's wings with a button to rise or descent while moving horizontally to engage enemies and the joust being decided by the relative height of the opponents is obvious still there. Though where the original applied a flapping and collision model which was, for arcade standards, believable and manageable, this one's physics are more akin to pinball mechanics: Don't be surprised if instead of just lightly bouncing off a platform you hit, you will be richocheted across the whole screen in a random direction and within the blink of an eye! The feeling of having absolutely no control being reinforced by the fact that a single touch of the flapping button will make your steed shoot upwards by about a third of the screen whereas in the arcade version, it hardly did anything, allowing for much more fine-grained control over the player's sprite.