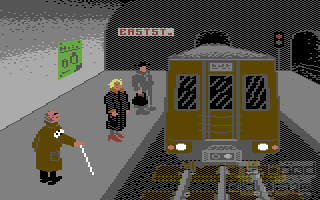 You may smile ironically about the graphics of C64 games. You may even consider them ugly. I won't protest much. In fact, I have to confess I don't value the 'multimedia' capabilities of this computer too highly myself. I can understand everyone who appreciates these extremely blocky looks, but I've been 'socialized' by other machines mainly. One thing is undeniable, though: The C64 had and still has the most creative 'user scene'! Even today, new programs are being written by the followers of this small computer, some even released commercially.

The game this review is about isn't one of those. It was made in the 'golden days' of the C64. In those days, a distinction between commercially produced and 'homegrown' games often couldn't be made. Only very few companies actually made their living by publishing computer games, and even those were mostly just publishers who took over the marketing side for young men in their early twenties (or even teenagers) who had written a game in their bedrooms. Programming wasn't a profession as it is today.

Many games were made, but not 'picked up' by any publisher. It didn't matter much: every new game was destined to be copied to death anyway. Even though this blatant copying ultimately turned out to be the C64's curse, it was a blessing for all 'bedroom coders' who didn't want to make any money with their games, but just wanted them spread. Just imagine: in the pre-Internet days, amateur software was spread more efficiently than it is today! Imagine Mafia being new and offered through the programmer's website. Right, it would be ignored to death. In 1986, you got it from a friend on one of these floppy disks with 100 games on them - and you certainly did try each of them out!

Granted, just like today, most of those 100 games would have been crap. Mafia doesn't disappoint, though. It's one of the rare cases of an original idea being executed just right, without paying attention to the annoying borders or genres or other conventions.

Like in RAF, you're managing a criminal mob. Just that this time, you're not interested in political revolution, but only in money. The ways to get this are well-known from the stereotype mafia movies: promise people 'protection', lend people in trouble money, rob banks and so on.

It's of course not quite as easy as it sounds. Local shopowners won't give away their hard-earned money without good reasons. Also, the police and other gangs are always on your heels. A few gunfights (presented in simple tactical style similar to the Speccy classic Rebelstar) are unavoidable. And the bigger and more dangerous your gang gets, the bigger will the police teams sent to your doors be...

Overall, Mafia is lacking RAF's over-the-top feeling. Being a gangster is nice, but shooting VIPs personally is more fun

The graphics of the locations are actually pretty good, but those pictures won't keep anyone playing. After a while, the player has simply seen everything and most parts of the game just boil down to visiting the same places all over and over again. There go your dreams about a romantic and adventurous life as the big cheese...

I really enjoyed mafia at that time but replayed somewhen later I really considered it very "imbalanced", i.e. weapon prices <-> their power / jobs <-> rewards/enemies etc. aren't appropriate at all.
Furthermore, there are some cheesy and annoying (and boring repetitive) ways to gain lots of money very fast.

And the whole random character points / money generation at the beginning was always frustrating in multiplayer games (at least for the unlucky people ;-O)

...But I know, the main part was written in BASIC and one could had made it more fair by oneself. 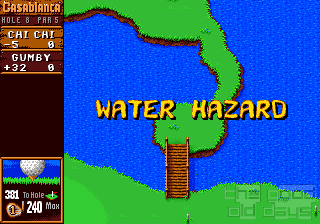