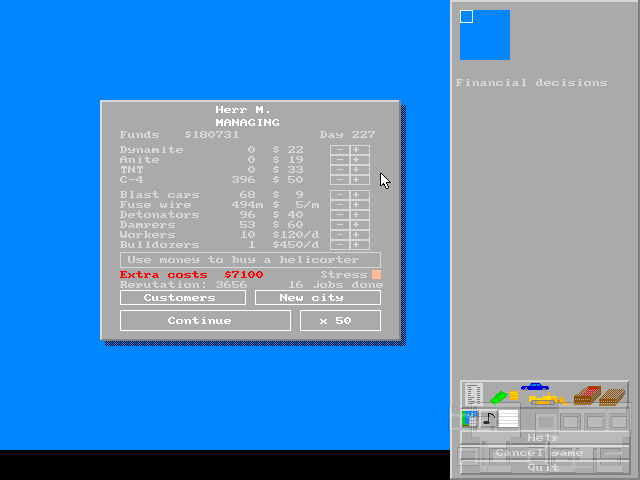 Operation Cleaner is a homebrew freeware title, which was created by a certain Jan Nyman (a Finnish indie programmer) at the end of the '90s. Casting you in the role of a demolition expert, the game mainly consists of vertical cross sections of buildings, in which you place several types of explosives, wire them, hit the red button and watch the spectacle. Hire some people to clean up the mess and thatâ€™s it.

This might sound a bit simplistic, and it certainly is, but itâ€™s still a lot of fun to watch those wood cabins, ex-hotels, towers and radio masts crumble and fall. Even if your options are limited and the gameplay isnâ€™t that ultra complex, there are some nice bonuses that provide a certain charm, like having to reduce your stress level (by buying sports cars, having a nice dinner, etc.) or some of the job descriptions. Also the larger buildings in rather densely built areas are challenging enough to keep this from becoming a no-brainer.

Nevertheless for the most part itâ€™s a rather easy game, mainly because on the realism scale this â€˜simulationâ€™ clearly lies in the fantasy region. Besides the very basic financial aspects (donâ€™t spend more money than the job offers, try to avoid having to use the insurances), the physics are totally off. This comes as no surprise though: Considering the CPU power of the common MS-DOS PC and the complexity of the equations of motions for multiple particle interaction in a gravity field, you certainly have to lower your expectations. But the â€˜scienceâ€™ of this game is either extremely hilarious or bugging. I think almost everyone knows how the typical demolition of a building looks like: There is a blast and then the building crumbles and folds in on itself. Thatâ€™s something which never will happen in this game, for several reasons.

One of the things you will notice at your first assignment is that a single block of wall can support a whole skyscraper. The buildings wonâ€™t fall, yes they wonâ€™t even move the tiniest bit of a fraction until there is a clear line of free space from the left to the right. Now, you donâ€™t need an engineering major to intuitively know that this canâ€™t be right. And even when they do finally start to crumble, there is still no toppling. Try as hard as you might, everything just drops straight to the ground, ignoring any kind of overall stability. In real life this could actually be very handy, since one of the biggest problems of a failed demolition attempt is a very unstable building.

The way the debris is dropping is also somewhat dubious. By now it should be common knowledge that all bodies drop at the same speed (when ignoring air friction, which you easily can in this case). In real life this leads to the nice effect of a demolished building driving in the ground like one very big elevator. All the bits and pieces are falling simultaneously. But not in this game: Since each particle movement is calculated on its own and knows only one kind of interaction (move left or right when standing on top of another non-moving piece), you get such nice effects as higher pieces overtaking or crashing on lower pieces or pieces from the left falling under pieces on the right. The final result might not be all that different from those of more complex calculations, but the rubbish piles up in suspiciously symmetrical heaps. 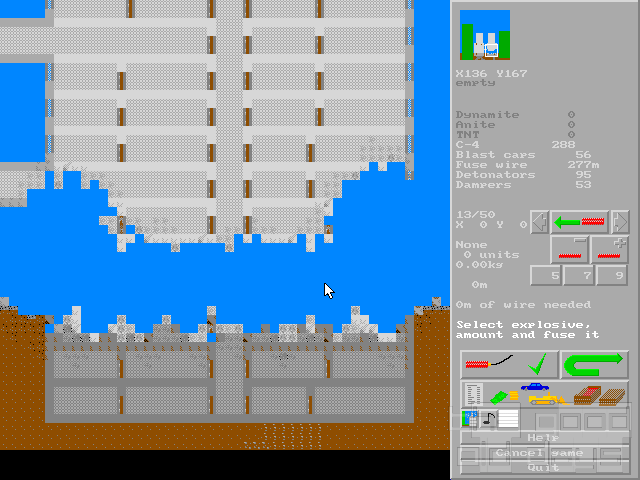 One thing which only becomes apparent for the larger buildings is that they donâ€™t fold up on themselves while they collapse. Thatâ€™s because when it comes to volume, the cross section doesnâ€™t differentiate if a wall runs parallel (lots of â€˜piecesâ€™) or perpendicular (actually one â€˜pieceâ€™) to your point of view, each block takes exactly the same amount of space. So the whole building is one solid object[1] and not a hollow body. To give you a better picture: If the game was about folding up a milk carton, it would give you the impossible task of doing that while itâ€™s still full. And thatâ€™s a serious flaw, since why should you bother trying to blow up a building if you gain nothing from it beside scattering the pieces all over he place?

Speaking of scattering: The explosions are nothing more than removing some pieces of the structure and damaging some random blocks. There is no shockwave, no heat, no need to synchronize them. For a game that is all about explosions, they are somewhat neglected, when it comes to their actual simulation.

Still: Itâ€™s a game after all, and an entertaining one at that, even if a great deal of the fun comes from the hilariously weird science. And a more serious flaw than the simple calculations is that there is one tactic that almost never fails. In those rare cases it does, you just have to make some minor adaptations. I wonâ€™t spoil it, because as soon as you know how to do it, the game just becomes a rinse and repeat job.

Testing different approaches, optimising the charges and trying to find this â€˜bestâ€™ method, along with the novelty factor of the game, will keep you playing longer than the initial levels, but your interest wonâ€™t last for all of the several dozen buildings the game has to offer. If it should, or if you have a very special setup for your â€˜operationâ€™ in mind, there is an easy to use level editor, too.

Considering itâ€™s an one man effort, I think it does a very decent job. Even though the unspectacular presentation did age horribly and the game lacks refinement of its mechanics, itâ€™s surprisingly playable. I would heartily recommend it if you are interested in at least one of these three things: homemade games, unique ideas or blowing things up. I would advise to avoid it at all cost in the following cases: Using a state of the art gaming rig, expecting a convoluted story or planning an actual blasting operation.

PS: And yes there is a scenario with two high buildings standing close to each other, which therefore has a â€˜twinâ€™ in its nameâ€¦ and they do stand in New York. Well, this is definitely a game from more innocent times.

[1] Strictly speaking, since this game runs in a 2D world, the building is treated as a flat surface, while a 'normal' building should behave like the boundary thereof. But we also have to assume that the structures do have depth (e.g. there are some shading effects and, more down to earth, no-one could live in/use a 2D building), so it's safe to stick to the statement above.

Well, at least in BD, when a bottom boulder is removed, the ones straight above will fall downâ€¦ which is not the case in this game if your review is to be believed (also seen on that hilarious screenshot

Originally posted by Mr Creosote at 08:39 on June 29th, 2013:
I would actually argue that those compilation CDs killed the Shareware concept.
In a way they were a precursor to the internet, which in the the end really killed Shareware. Maybe for the reason you cite above, the overabundance of stuff and not knowing how to keep up with it, maybe it was also because there was enough free games to make you wonder why you should pay for the other ones in the first place. In the end all that remains of Shareware are trial versions and something like it's inversion: The Kickstarter (paying for a game that doesn't even exist instead of paying for a game you already have).
Mr Creosote:

So, to sum it up, this game has worse physics than Boulder Dash?

On the topic of the news, I would actually argue that those compilation CDs killed the Shareware concept. At first, they certainly did bring more attention to it on the surface, but if you think about it, it took away attention from the individual games. It sort of was the beginning of the age of total availability of too much stuff which nobody ever could find the time to even try out seriously! Don't we all know and hate it these daysâ€¦? 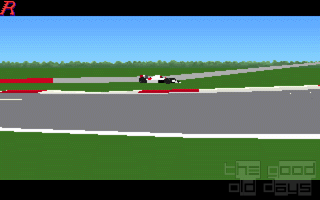