The Activision Decathlon
for Atari 2600 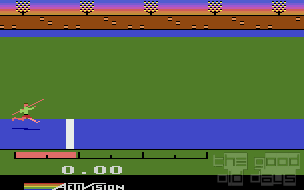 Virtual sports should be physical exercise, too! No, this is not a review of a modern-day Wii title – the idea goes back to much earlier time. The first game to famously follow this premise was Activision's Decathlon. 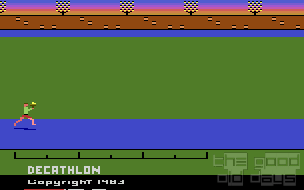 Getting into the Olympic spirit already!

Granted, the kind of physical exercise is largely one-dimensional. Instead of the wholesome, healthy training of the human body which participation in an actual decathlon would represent, legendary designer David Crane boiled all the challenges down to hand and wrist strain. Not exactly healthy, neither for the joints, nor for the controllers of the console, both of which notoriously needed replacement after too much time playing Decathlon.

Of course, I'm talking about the much-imitated waggling controls: For the athlete to run faster (or build up strength in some cases), the player moves the controller back and forth as quickly as possible. This makes for quite furious sprints and turns into quite a tiring chore in longer distances. Though at least in the 1500m discipline, the game turns merciful, i.e. it doesn't require the waggling to be quite a furious… or so you think until you get to the 1100m mark when the game declares Sprint! and drops back into… well, sprinting mode. Meaning it wants you to waggle again like there is no tomorrow after already having gone through a couple of minutes of constant waggling of reduced intensity. Throwing or jumping disciplines add the (hopefully) well-timed pressing of the button, the high point of complexity being Pole Vault which even needs two timed button presses after the initial waggling: one to launch into the air, one to let go off the pole. That's it, then, though. 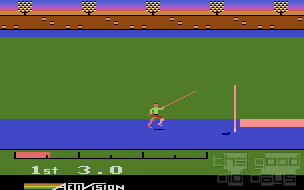 Undoubtedly, this is both boon and bane of the game. It makes all disciplines feel basically the same, but it also makes it easy to compete in all of them without things becoming too complicated. The latter being particularly important in the multiplayer situation: Whether your friends have had any practice with the game before or not is hardly of any consequence – they can still have fun competing against more experienced players! Which is good, because just playing against your own highscores is not that great on the long run anyway. Just like real sports, this one should be practiced in company. Even if, admittedly, it would have been nicer to actually compete 'live' instead of just taking turns.

Regardless of any other consideration, Decathlon's huge influence of the genre has to be acknowledged. What you see here is one of the seminal games which shaped its genre for decades to come! It therefore deserves a deep bow – even if we all learned to hate waggling, we revisited these games again and again. 'Deeply frustrated' or 'exuberantly happy' have never been closer together!

Mr Creosote (2013-07-06):
Actually, I did buy a more expensive joystick once, but that was a couple of years after the end of the Atari VCS era. It was the worst possible decision: It was a 'Quickjoy', a brand known for its bad robustness, but it had a larger base (the standard Quickjoy could only really be used if I used the left hand to hold the base down on the table) and a clock. I guess it was the latter which made it expensive. A completely useless gimmick, of course, and the actual joystick broke after two or three weeks

Herr M. (2013-07-06):
Really?! Judging from some broken keys and a couple of dead mice, I killed while doing similar tasks, my guess would be have been around five, maybe ten… Well maybe there is something to it, that those games were just created to increase joystick sales.
Mr Creosote (2013-07-06):
Me, probably two dozen. It didn't help that I didn't learn and kept buying the cheapest ones instead of investing a little bit more once.
Herr M. (2013-07-06):
OK, in my whole gaming career I owned just one joystick (which broke while playing space-flight sims btw.) so I have to ask: How bad were games like this really for the controllers? How many joystick did you actually kill this way?
[Reply]