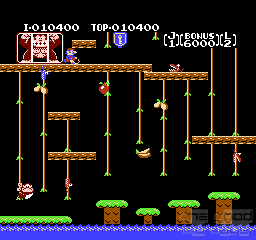 The evil Mario, well known for his hate to the animal kingdom, has struck again. The latest plot of this dangerous plumber has been trapping Donkey Kong, and only his son, Donkey Kong Jr. can save him from ending as a circus sideshow.

NES games are not known for being overly complex, yet this one manages to be among the simplest of them all, it's all very straightforward but being the second part of the old Nintendo arcade cabinet known, unsurprisingly, as Donkey Kong this is to be expected. In essence not much has changed from the older game, they just gave it a literal twist, as the level instead of following the usual horizontal layout uses a vertical one, but the end result really differs from its predecessor.

If you want to reach your goal, which is the trapped giant gorilla, this time you must climb a lot, then move horizontally from vine to vine and keep climbing and descending to avoid the minsters which Mario is sending you. As said, what previously was done moving horizontally and then climbing, now is done climbing and then moving horizontally. Both ways of movement may sound equally easy, but if you try the game you will find things are different from the expected, mostly because the monsters don't want to be avoided.

You have to dodge them, and this is the only complex part of the game: You can grab one or two vines, and enemies usually move through them forcing you to change from one to the other. Grabbing two means climbing fast and descending slowly, while this is inverted when using a single vine. So navigating the level becomes a complex feat of jumping from vine to vine, constantly surrounded by dangers which come and go, a situation where a single error will kill you.

If you need a bit extra help there is no luck, even if there is actually a small weapon around the level, the fruits which also serve to get bonus points, they are quite useless. Touch them and they fall, killing any enemy they find on their path. So in reality you are defenseless against the enemy, with only your reflexes to help you.

And to add a masochistic layer you can't jump away from danger. If you try to move from a vine into empty space you will fall, and any big fall will kill you.

Once you survive all these dangers and reach your father the second part begins, this time you have to free Donkey Kong climbing and at the same time pushing some keys into their keyholes. It may sound as a little change, but actually it has a big impact in how the game works, making these levels much faster and requiring even more reflexes.

But that's all, once you free your father levels change but things remain the same. There is a little edutainment game as a bonus to try to add a bit of life into the game, but that one is really bad. Actually, calling it a game is misguiding, because that section lacks anything to play, all you have is a formula with some hidden numbers, a key and a lock. Move the key to the lock and all the numbers are revealed. Impressive.

The game is curious for being an attempt at reviving an arcade hit which also shows Nintendo's doctrine in older times which also would be kept on NES games: making second parts which try to differentiate themselves from the original.

Apart from that we get just a very small game, which may not be bad, but it's too short lived, and too simple, to have any real transcendence. 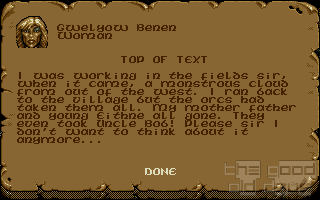