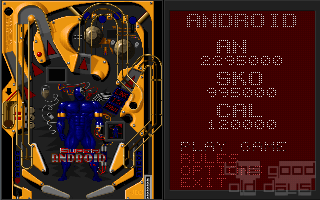 Another pinball game to introduce. Epic Pinball, like its name says, is epic for a pinball game on PC. This game was made by Epic MegaGames in 1993, now known Epic Games (Gears of War, Jazz Jackrabbit, Unreal Tournament). It was never released initially in retail stores. It was distributed as shareware with one table named Android, then you could order the game available in 3 packs with 4 tables each. So here the description of each tables + my little review on each.

These tables I am going to talk about came from the first 2 packs that went out originally with the game you can buy. Android, Pot of Gold, Excalibur and Crash and Burn came from the first pack. So for the first table, we have Android. Possibly one of the best tables of the game. It does have a lot of specific places to get our balls to go, very complete and lots of fun. It does have some challenge, but it is still enjoyable. It is a hyper active action type table. For Pot of Gold: It is more basic than Android, it is not the type of table you see your balls going everywhere at full speed. It's just “hit the ball” then wait for it to come back right away. But still fun to experience. Excalibur is another amazing table with a lot of old school lights that we love. It does have a lot of space to shoot our balls for different scores. Then for Crash and Burn, this one is my favorite tables. It is very challenging and really fast. A nice racing car theme table with amazing music. That's all I can say, a very fast gaming table.

The second pack included Magic, Jungle Pinball, Deep Sea and Enigma. The first one is a funny table for me named Magic. It has a mid '90s magic theme. Not really impressed, but it stays basic and fun to play. A little easter egg for the next one, Jungle Pinball. First thing I noticed was the catchy music while I played this table. The other thing I noticed about this one is the name in the middle of the table Jill of the Jungle. That was the name of a previous game they made. Deep Sea is a very basic table. All I can say about this one, it is very, very repetitive. It is fun at the beginning, but after you complete the objective the first time, there is nothing more to expect. One more thing, this table is “the one table” to get a very high score in no time. Finally we have Enigma. That's the strange one, it is fun, but very confusing at the same time. Your ball disappears and reappears every other second.

The following tables were not created by the original developers. The third pack was realeased later after the 2 original packs and included Cyborgirl, Pangaea, Space Journey and Toy Factory. Cyborgirl is my least favorite. You can see a blond girl that takes nearly the entire table and every time you make points, you hear the girl screaming. At the end, it's annoying. I had the same feelings for Pangaea. It is boring and there is not much to do. The table is nearly empty. All you can see is a big green dinosaur. And again, Space Journey is not better than Cyborgirl and Pangaea. It does not offer anything while playing. It's just redundant and not much to do. The only good side, the music. For the final table, we have Toy Factory. Surely the only good table from the third pack. Fun, kind of original but a little too difficult.

Let's also talk a little about the engine of the game. The game is running very smoothly but it does not really feel like a real pinball machine. The flippers don't act like it should be. They are responsive but sometimes the ball doesn't go where it is supposed to go. You have a tilt function but it doesn't really work. There is not much difference when you use it. You can feel like playing a non standard pinball game. It just feels like it is in reality a PC pinball video game. If you don't mind these details too much, you can still have a lot of fun playing this game.

In conclusion, the tables from the 2 original packs were amazing, a little challenging, but they were decent. For the third pack: If I bought this pack at the time for the price they asked, I would have been very disappointed. Anyway, I recommend any pinball gamer and others who want to discover the pinball world to try this game.

I used to play the shareware table (Android) quite a lot. So much that I even considered getting the registered version, but lacking a credit card I had to give it pass. In the end I even tried to hack the game files in order to look for a way to open up the other tables (naturally they simply weren't there).

There were two things I really liked about this game: the smooth and fast gameplay and a cheat option, which let you take control of the ball via the cursor keys.

Mr Creosote:
That's a pity. I even doubt it would have undermined their business model, because as your review shows so well, designing a good table is hardly trivial.
yukin:

Well, The third pack tables were "DESIGNED" by other peoples but was still created by Epic.

I miss this little information in my review.

Mr Creosote:
Seeing that there is a third-party table pack, does this game come with a built-in table editor? Or is one available as an extra?
yukin:
Feel free to share anything about Epic Pinball (1993) here!
[Reply] 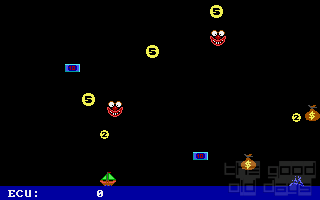