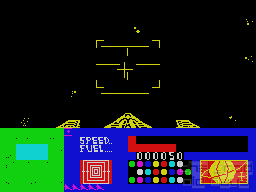 The history of one of the greatest computer game developers begins here: Graftgold! Riding on the first 3D craze and applying it to the current Star Wars hype, 3D Spacewars is exactly what the name suggests: a space shooter in 3D. Of course, on the home computers of the early 1980s, 3D usually simply meant to have flat enemy sprites in three or four different zoom levels which were switched on the fly to simulate changing distance. A technique which never really looked all too convincing, but whose signalling intention is clear enough. 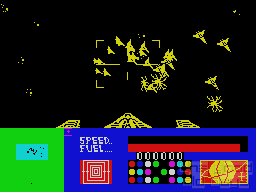 Compared to the typical standards of such games at the time, 3D Spacewars manages to draw an almost unprecedented amount of sprites on the screen at the same time without noticeable slowdowns. The player faces the Seiddab fleet (yes, those were simpler times, in which it was still enough to simply declare someone to be 'baddies' without the need for any deeper explanation…) all alone. Blasting their ships is made more difficult by their sensible battle tactic to disperse before engaging. 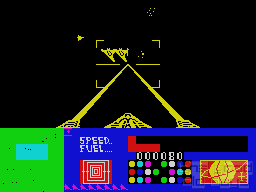 The enemy ships' positions are shown on the player's radar. Graphs show the player's ships speed and the amount of fuel left. Due to the many twist and turns necessary to finally catch all the baddies, it is strictly necessary to refuel a couple of times during a mission. Those refueling points can be seen on the radar as well, but – probably the only major problem of the game – their blips are indistinguishable from the enemy ships.

The flying model is based on a decent simulation of inertia, but without making it too 'realistic', i.e. keeping it playable. Improving playability for non-joystick users is a feature which unfortunately has not become a standard of the genre: groups of keys are mapped to a single function. So it will not matter whether you hit 'q', 'w', 'e' or 'r' in the heat of the action – either will move the space ship upwards.

Admittedly, this sort of game usually does not age very well. Obviously, 3D Spacewars is nothing special anymore and it most certainly has been surpassed in every way imaginable. Though that doesn't mean it is not good for a quick game of carnage anymore. Give it a try, it might put a smile on your face at least. 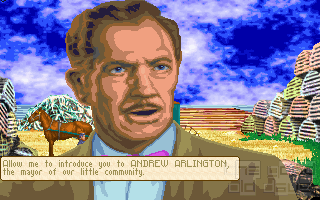