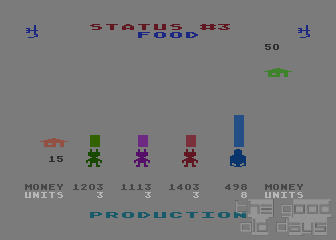 What is a M.U.L.E.? It stands for Multiple Use Labor Element, the robotic backbone of the economy on planet Irata which is about to be colonized by members of different alien races. And, well, from human history, we all know what 'colonisation' implies: Grabbing land before anyone else does, exploiting it for profit and when you've milked it dry, move on – leaving political and economical chaos behind.

OK, so the long-term socio-economic aspects are not really part of this game. It is even completely unknown whether the planet has a native population to start with. It all plays rather like a board game: Each player can acquire one square piece of land per turn which they can then choose to develop to produce one out of four trade goods: food, energy, coal and gems. This is where the eponymous M.U.L.E. comes into play: One of these devices need to be deployed on each square. Otherwise, no produce. 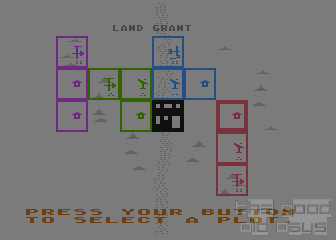 Random events, such a pirate raids or M.U.L.E. malfunctions, can occur at any time, but the real core of the game is the trading. This is where the strict turn-based approach gives way to a real-time sequence to negotiate the prices of what you want to buy or sell. All the players (more about this later) simultanously move their sprites across the screen to indicate their willingness to buy or sell and for which price – this is basically a geometric representation of a negotiation, so that meeting another sprite implies that an agreement for transaction has been reached. A metaphor which is so obvious and incredibly intuitive!

So what about those players? M.U.L.E. is one of the very few games to support the Atari's ability to connect four joysticks. So in those shared 'action' scenes, each player can easily control their avatar without interfering with each other on the keyboard, for example. This multiplayer mode has not been added as an afterthought, but it is an integral part of the overall experience. 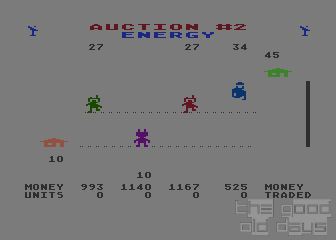 While the explicit features might not be too numerous, this turns out to be exactly right for a multiplayer game. The phases into which each turn is structured can be intuitively understood. There is a mixture between individual player's turns (pauses for the others) and phases in which everybody is in action simultanously. And the complete game can be finished in a justifiable amount of time.

The really tricky choices which often decide about winning or losing are not the ones actually embedded into the gameplay explicitly. Rather, they happen in front of the television, i.e. either in the players heads or in off-screen negotiations between them. For example, a monopolist could try to withhold supplies of one good for a turn to try and raise the prices – while risking spoilage or another random event and certainly not making any friends with the other players.

So that's that. Get three friends in front of your TV and you will have great fun with this seemingly lightweight economy game whose deeper complexities you would do good not to underestimate. Though although missing human opponents can be substituted with competent artificial intelligence traders, don't consider single player games as anything but basic training for the real thing. 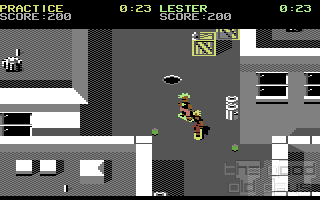