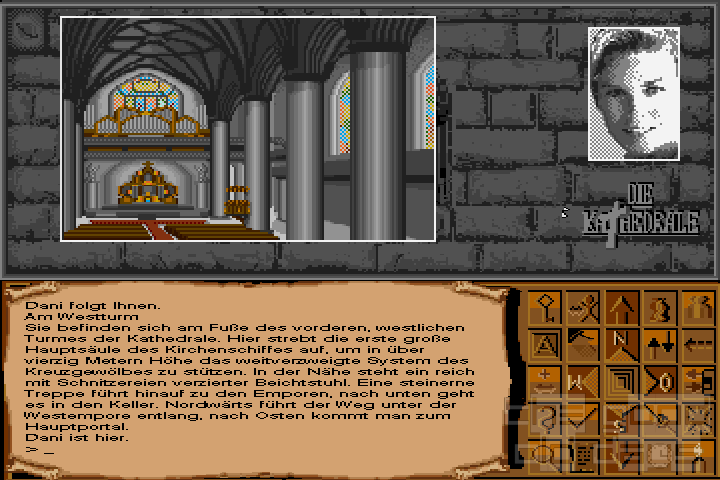 Imagine you are in the city of Schönau and you visit the St. Paul's Cathedral, meeting an old friend from your school days. The girl separates you from the group and you find a couple of old letters and because you are now late and got away unnoticed, you are both locked into the cathedral over the weekend. This is how the adventure game Die Kathedrale, which has been spruced up with graphics, begins. After studying the discovered texts, your protagonist and his friend that it is exactly this weekend that a revenge spree planned centuries ago by the architect should now take place. This architect, a Victor Paz, was an opponent of the inquisition and he supervised the construction of the cathedral. That is why he had the means to include some traps which should be triggered only centuries later.

There weren't many German text adventures. It was all the better then, that Software 2000 released three text adventures (Das Stundenglas, Die Kathedrale, Hexuma) on a quality level only known from INFOCOM games.

The texts were written by Harald Evers, who was also responsible for the first adventure from Software 2000, Das Stundenglas. The game is really enjoyable for people who like to read and also like solving tricky tasks while doing so. The game, as far as I know, contains about 300 pages of text and that is already quite extensive. There are also some nice drawings in the game, but they are of bad quality. Personally, I find it disappointing that you can't switch to 'just' text. I would have liked it better. In the box, there is a floppy disk, a chronicle of the cathedral of Schönau, the old letters and the maps of the cathedral.

The screen is separated into three parts. The upper half shows pictures of the different places. On the bottom left, text is shown, and on the bottom right, there are 25 predefined buttons. The predefined buttons are, for example, used for verbs. For example a key symbol. Clicking on it, the word 'open' appears and you only have to enter 'door'. Hardcore freaks will only read the text and immediately write 'open door'.

The texts accompanying the locations are written in a very thrilling way. It is entertaining to read them (there was also a book). The parser really understands a lot. For example, you can enter 'examine the window and open it'. But you can also give orders to the school mate (Dani) or other people appearing in the game. What you don't have is time, because the revenge should take place this weekend. This is where you should use the saving function. When you have solved a puzzle, you should restart from scratch and play again up until that point without wasting time in between. For some puzzles, studying the accompanying letters and the chronicle of St. Paul's Cathdral is important. Because there are many clues hidden which help solving the puzzles. Once I didn't really read something and then proceeded to search all chairs in the church (about 200), only to find out later that what I was looking for was located somewhere completely differently. What should I say? Learn to read!

A very well made game with good texts and tricky puzzles. Lovers of text adventures will enjoy it. The game gets 5 out of 6 stars from me. The only reduction is because of the graphics.