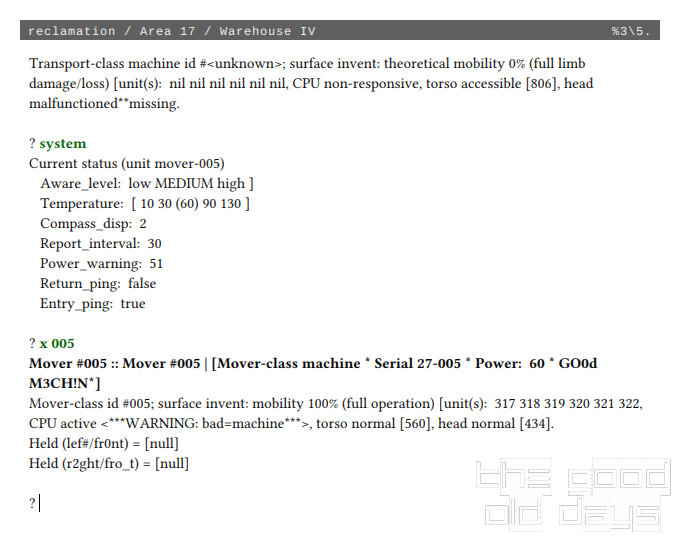 Do you understand me now? Excellent! As you might have guessed by the name of this text adventure, and the small taste of its pseudocode above, Bad Machine is about a robot called ‘Mover 005‘, which gains sentience in a fully automated and completely networked factory. A bit overwhelmed by this unexpected situation, you will first have to find out what’s actually going on and then think about what to do with your newly won freedom.

And this already brings us to the core gameplay: Learning to understand and use its very unique syntax. At first it might just look like the descriptions were replaced by strange code fragments. But after the first few (probably failed) commands, you will soon come to realise that the changes go even further. That is the parser saw some changes too, for a majority of the usual commands show no (or only limited) effect. There is a couple of new commands instead that fit navigating a computerised world quite nicely.

These include important things like transmitting certain signals (e.g. queries and confirmations) to the other robots, a comprehensive index, where you can look up the functions of all kind of objects, and to check and configure your own system settings. ﻿These commands together with the unique ‘prose’ ( which is partly modelled after the – under Hax0rs very popular – l33tspeak) might strongly remind you of certain programming tasks. Specifically, it has very much in common with reading and altering other people’s source code. So, a basic knowledge of the one or the other programming language is certainly useful, but overall things aren't so complex that such a skill would be a must-have.

﻿The real charm of the game lies not only in understanding the technobabble, but also in pushing the boundaries of your world, to feed your co-robots with so much unexpected input that (more or less) unexpected things start to happen. Funnily, often enough it’s the (in the strictest sense) most mundane things, that incapacitate your metal comrades. But unlike the player, they simply lack the ability to deal with any deviation from their fixed routines, which often leads to some kind of surprise.

So mentally, you, the player, are far superior, and you should use this advantage good and proper. For as far as sheer physical abilities are concerned, the others will almost always have the upper hand. And if you aren’t careful enough, or step out of line, you will be disassembled or reprogrammed in no time at all. You will probably have to restart quite often, because you had a clash with one of your ex-colleagues. At times this gets quite frustrating, because it’s not always apparent what triggers such hostile behaviour, but in the end your victories will be all the sweeter.

And speaking of victory, this is one of the most remarkable aspects of the game, because it’s not so easy to tell when you have won. Or come to that, what should be your ultimate goal. In the beginning it’s certainly the puzzling, trying to understand, what the heck is going on. Then you go through a phase of experimentation. You give the new commands a try, see what they do. As soon as you develop a sense of your abilities, you set out to make some discoveries, to explore your surroundings. And in the end all of this leads to the ultimate question: What‘s the best ending in your opinion? Actually I am not so sure, that it‘s necessarily the hardest one to reach.

﻿Not only are there a lot of metaphors on human life itself contained within this game, it raises quite some important questions too. Such as: What do you do with your freedom? How far would you go for it? Do you even want it at all? Can the machine really be ‘bad’ in such an amoral world? Or do those robots have their own morals? Are there parallels to how we, humans, follow our society’s rules? Maybe I am interpreting a little bit too much into a simple text adventure, but you certainly can‘t help but wonder. Especially because Bad Machine has the decency to impose no clear answers, but to leave room for your own thoughts.