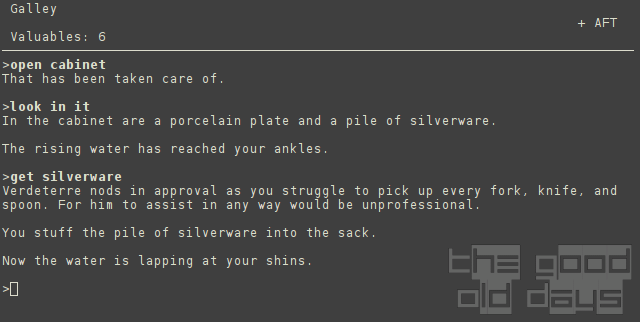 [Mr Creosote] Captain Verdeterre's Plunder is a humorous, very short game. The player takes over the role of the first mate on a sinking pirate ship. It is his task to save the most valuable treasures which are spread all over the ship.

[Herr M] And all that happens under the watchful eye and the sharp tongue of the titular captain who (surprisingly at first) is actually a rat. As it looks like, quite a greedy one at that, for (almost) nothing seems to be more important to him than getting the right sum out of it.

[Mr Creosote] The nice idea is that you will not be able to get everything. The water is slowly rising through the decks of the ship so that at some point, lower ones cannot be reached anymore. If you don't want to drown, you have to get to the life boat in time. So the task is to grab only the really valuable items and leave the worthless gewgaw behind.

[Herr M] Hardly anyone will manage this very well on the first attempt, even just exploring the whole ship is hard due to the pressing time limit. Not to mention estimating an object's value, because what may appear valuable in a hurry may turn out not to be worth a dime later on.

[Mr Creosote] In the final balance sheet, the exact value of each object is then listed down to the last penny and this value is static over every game you play, so you can try to optimise your strategy over multiple attempts. Which turns out to be more complicated than it sounds.

This is because the more valuable treasures are of course hidden or otherwise inaccessible at first. So you have to weigh the several turns it takes you to get them versus just taking all the less valuable stuff lying around in plain sight.

[Herr M] This weighing of options, finding the (presumed) best route through the ship which gives you the highest loot, makes for the game's main appeal. So there is quite some replayability, at the very least until you have discovered all of the treasures.

[Mr Creosote] This discovery process is almost a story of its own. As I said, some treasures are hidden behind small puzzles of different difficulty level. Shooting a lock may still make sense. Reading a book, on the other hand, may not be the most logical action when the water is already up to your thighs. Those two, though, are still relatively fair, though. Getting the dagger which is stuck in the mast, on the other hand, is really unfair – I just cannot accept this sort of thing!

[Herr M] I had actually given up on this dagger at some point and eventually I even asked the author whether there is a trick to it. As a matter of fact you can get it just at random. Not a very fair decision, as he even admitted. On the other hand, it could almost be exciting… if it wasn't for the UNDO command which completely negates this.

[Mr Creosote] That's exactly it: The 'solution' to the dagger problem is just tying GET DAGGER and UNDO alternatingly until it finally works. So the player is basically forced to make use of an action which takes place outside of the game world.

Putting that aside, though: If I'm not totally mistaken, this optimisation task is part of the set of np-complete problems. Which makes any structured attempt at coming to a solution futile. Even that just if you ignore the random factor – otherwise, you would have to model it as a stochastic process.

[Herr M] If you look at it from a mathematical perspective, sure. But to me it is something like a lottery: Granted, you cannot win if you look at it in a matter-of-fact way, but if you let yourself into it, take everything which is not nailed down to your heart's content, it can still be entertaining. And since there are a certain optimisation potential and different endings, depending on your performance, it can still be quite enjoyable with this in mind.

[Mr Creosote] Maybe I'm too much of a perfectionist in this respect, but I have seen three different endings (apart from drowning) and those were all reached relatively easily. The 'best' one (meaning the highest sum of money) was even the least interesting. When someone gives me such a task, I want to take it to the global optimum solution. This is spoiled for me, because there is no better strategy than trying every possible combination out. As I said, it's the mathematician in me which is in pain.

[Herr M] Though basically, this game is not really different from other adventures, other than that the puzzles can be solved in parallel and that there is no fixed upper limit to the number of points, i.e. there is a lot of freedom.

[Mr Creosote] I see most other adventures more a sort of 'get through' task than an optimisation. The maximum number of points is a good cue, though: The side conditions of the task cannot be pinpointed. I never found any information which really tells me whether I have even actually identified and found all treasures. Before that is clear, I cannot optimise, because the side conditions are not clear. Why doesn't the value breakdown at the end just list the maximum number of points (i.e. the combined value of all treasures) as comon in classic adventures?

[Herr M] Well, first, it should be impossible to get all treasures in one go anyway and you have to make sacrifices. Second, it should be much more fun to explore the ship by yourself anyway instead of just getting a list of all possible treasures. As I said, hardly anyone will have seen everything at the first attempt (I didn't even find the life boat first time around). If the ending revealed everything, this would massively spoil the fun.

[Mr Creosote] I'm not saying there should be a list of all treasures with their names, values and locations. Only a detailed breakdown of everything you've found (as it is already) and additionally the sum of what all objects found on the ship are worth combined. Just a number, nothing more. Maybe even with a comment that this sum cannot be reached. Still, it would be an objective way to find out whether you have even identified all variables of your system of equations. Because the game denies me this information, I lost all interest after playing through it four or five times (which is really not a lot: one playthrough takes about five minutes) as it didn't offer me a realistic perspective to solve it.

[Herr M] Granted, once you've reached the 'best' ending (which probably is the one with the polar bear), there is little else to do/see. Replayability is unfortunately a little limited after all. Though it could be interesting to compare high scores with other people.

[Mr Creosote] It is a game which bargains on being played repeatedly. Nothing wrong with that. This just has to be properly motivated. The appealingly casual writing style does make some points in this respect, but after a couple of playthroughs, you've seen most of it. After that, at least for me, it would have required a perspective, an opportunity to solve this task in a more systematic way than 'intuitively'. So in spite of the excellent technical quality, my overall conclusion is a negative one.

[Herr M] For me, the intuitive scenario, the really humorous breakdown at the end and the really well-done character of the captain (who is used skillfully to give a lot of additional commentary) were sufficient motivation. Maybe there is no perfect solution, but I prefer the freedom of exploration within this nicely detailed world anyway.

In addition, I could brush up on my English nautical vocabulary a little through a nice bonus feature.

[Mr Creosote] So for our readers, this means: See for yourself! Finishing the game only takes a couple of minutes, so the risk is low.

[Herr M] And for the high score list: I have reached 823 Spanish dollars. Please leave higher bids in the comments section.