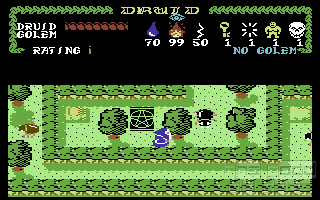 Druid is yet another game in Gauntlet style: top-down view, player runs around shooting an endless stream of monsters. Mostly, these games are set in fantasy environments. So is Druid.

Acamantor, some evil sorcerer, has summoned four 'demon princes' to help him rule the country of Belorn. The guild of druids sends one of their illustrious members to banish these powerful creatures: Hasrinax. They could have gone all together, and the quest would certainly have been way easier, but then, this game would have been pretty dull. So Hasrinax is on his own.

What sets Druid apart from other Gauntlet clones is that you can't choose a 'character' to play. The one you do play is more exciting, though: the druid has seven different spells to choose from. Three of them are different missile attacks: water, fire and electricity. The monsters 'react' differently to those; some are easily killed by fire, but very resistent to water. With others, it's the other way round - or completely differently.

The remaining four spells are keys, invisibility, golem and chaos. Keys open doors, invisibility leaves monsters in the dark about your current location, golem summons the creature of the same name and chaos kills all enemies on the screen as long as the spell lasts and restores some health for the druid at the same time.

All spells are strictly limited. They have to be found in chests standing around. The three 'missiles' are relatively common, but the others are quite rare. Wasting them can often prove fatal.

The levels are laid out nicely, but thankfully not too huge and complex. The difficulty is just right to keep you occupied for some time. On the downside, the final fights against the princes is not too imaginative. It's also sometimes quite hard to keep control of your druid via joystick and the spells via keyboard. Especially when trying to open a door or a chest or trying to go through a narrow passage: You sometimes get stuck or don't seem to stand on exactly the right spot. The golem is a very nice idea: it can be controlled by a second player. If there is none available, though, it isn't such a great spell after all.

And now I'm suddenly stuck with this review. No way to come to a conclusion in a nice stilistic way. It happens. So I'll just say it without any connection: Druid is one of the best Gauntlet clones. 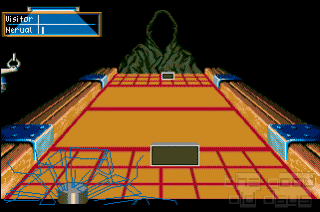