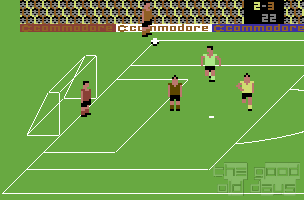 Sports games were among the very first ones ever – Tennis for Two occupied oscilloscopes in the labs even back in the 1950s. International Soccer constituted a major development on the emerging home computer platforms: Instead of highly abstract blips, there were suddenly large, reconisable sprites right there on the screen!

Just like those games which came before it, International Soccer gets right down to the action: Select the jersey colours of the teams and off you go. Kick off, and there we are, both teams going after the ball. In the frantic scenes right in front of both goals, it is hardly noticeable that the teams only consist of six players (plus goalie) – there wouldn't have been enough physical space for more of them anyway. More than anything, the noisy crowd wants to see goals. That is why hardly any rules of the actual sport have been adapted into the game. What was offside again?

It all fits together perfectly: You can sit right down and just start playing. Without studying any complicated rules or learning convoluted controls. Your player closest to the ball will become active automatically. Move the joystick into the direction you want him to move to. Push the button to shoot or pass. This is as intuitive as it gets. Where later games would try to extend this by introducing more complex game dynamics like different movement modes, distinguishing between tackles, little nudges etc., International Soccer defined the base of the genre for many years to come.

Now you might believe that it has been surpassed long ago. Maybe it has been in many respects, particularly when it comes to simulating a realistic game of football. Yet, never underestimate a simple, sound design. While later games might appeal to more dedicated gamers who don't mind spending some time to master one, International Soccer is just the right thing to pull out if a friend comes over for a challenge into which you both want to enter with virtually equal chances – regardless of both of your history or non-history with the game. 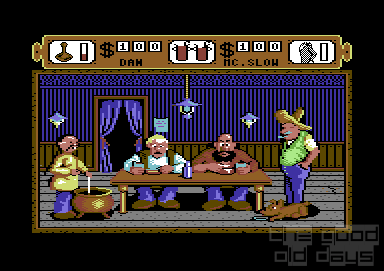