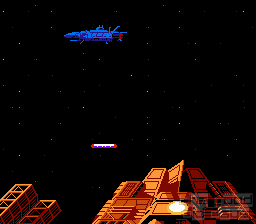 The classic arcade game is back, ready to make use of the latest home entertainment technology the world can offer. But did we get the original with a facelift, or is it an actual sequel? Is it still fun, fast and unforgiving? Why the hell does it even include a story? The answers to these, and maybe to more questions, are just a few words away.

Still, nowadays with emulation it is not a problem, and, again, let's take a look at what we got. For starters the story continues that of the first game. Don't ask me why we need a plot, but here you are trying to stop the evil Doh and all that. From what I gather, each level is supposed to be a part of a huge ship, and you are opening a path thanks to having the biggest balls around. Does this have any effect on the actual game? No, but you get a nice intro for it.

Actually Arkanoid 2 is still for the most part Arkanoid. You break blocks making a ball bounce around while, at the same time, you have to stop it from falling out of the screen and, once on a while, a power-up will appear. Then you die trying to grab it, or just because things are actually harder to handle with said help.

The change you will notice are enemies moving around the screen at random. They are a nuisance, and little else. Yes, some will kill you if they reach your ship, but this is rare and most of the time they will just get in the way of your ball. This ball is still your greatest enemy as, even thought it bounces in a predictable pattern (not so much with the enemies moving around), it's increasing speed makes all harder as time goes on.

In sum, there is little difference from the original game, they added just a few gimmicks. It's selling point was, no doubt, being able to play Arkanoid at home. But nowadays this means little, and the game ends looking like it just got a little make-up trying to make the old look like new.

Not that the game is bad, and I doubt it ever wanted to be anything more than a direct sequel, and it is actually fun, with that punishing kind of fun old games used to have. But if you have played the original, there is little here to surprise you.