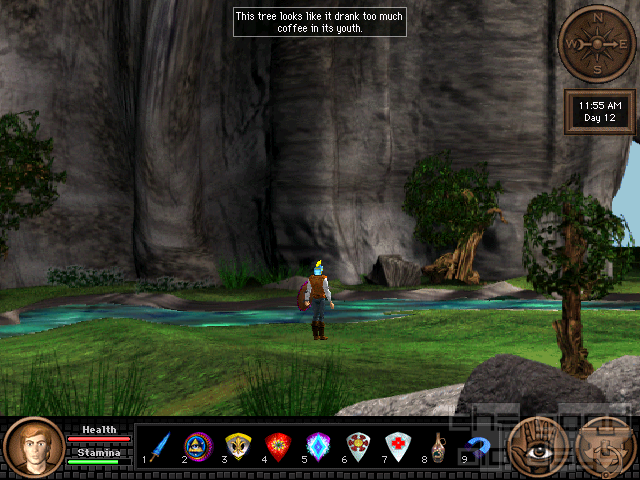 [Herr M.] The Quest for Glory series always stood out for being one of the more interesting Adventure-RPG hybrids, for its quirky sense of humour and for being one of the better (if not the best) Sierra ‘Quests’. The fifth and final part Dragon Fire, was released to relatively high expectations, after a relatively long break, following the excellent Shadows of Darkness. It tried to break new grounds, while still keeping true to the original formula and delivering a satisfying finale at the same time. The big question is: Did it succeed?

[Wandrell] To find that out, we will need to take a small look back at the game series. Each of them had a theme, based on a distinct region of the world. The first is in the equivalent to central Europe, and is an early renaissance world. The second is in a sort of middle-east, and takes from the Arabian nights. Then we got African tales, and the fourth is a mix of Romania, Russia and Lovecraft stories.

[Herr M.] And each one saw an increase in scope: While you freed a small village in the first one, you set out for a sultanate in the second one, freed almost a whole continent in the third one and saved probably the whole world by banishing one of the most ancient evils in the fourth one.

[Wandrell] Of course your character also did grow. The second game did add a fourth class, actually more of a subclass of the warrior: the paladin. While the mage kept receiving more and more new spells, and the thief gained a few new skills. And this growth could be kept from game to game, as all the games supported character transfers.

[Herr M.] So, in the end it was a nice progression from zero to hero and made for a big overall story arc. But by the fifth game it was time to get to a definitive ending, or it would have gotten ridiculous. How many times can one person save the world, before it starts to get boring? And what do you do, as soon as your character skills start looking overpowered? And they certainly did by now.

[Wandrell] This time we move into Greece. Well, it is not Greece, but tries to be at least East-Mediterranean, more or less. From time to time it keeps the tone, for example you have the Hydra and Pegasus, the bad guys are some invading people of the sea (which are called Roman invaders for some reason), and people speak in what I suppose is Greek. But then it adds some weird monsters that don’t fit very well, including a big bad dragon. Why did they go for a Greek theme if they wanted to add a dragon?

[Herr M.] Probably because a dragon is one of the most archetypical high end monsters. But to me it’s less that there is a dragon (actually the word does derive from the Greek word for snake), but rather that it’s such a cliche medieval dragon. Still, I think it's one of the rather minor faults of the story. To me, it's more disappointing, that it has absolutely no character and motivation beyond being evil.

[Herr M.] While it is kind of nice to see those familiar faces, and you do get some kind of closure for them, it is strange that almost all of the new characters are nothing to speak of. And this leaves you with the feeling of a very small world. That is if you played all the other games, because if you should be a newcomer to the series, I can’t imagine how you would comprehend what’s going on. Although it might not be that much of a problem after all, because the story really isn’t all that complex.

[Wandrell] For some reason, well, for clear reasons they decided to throw away the more free-form style of the previous games. On the predecessors you had some broad objectives, and could go for any of them, or just wander around building your character, and fulfilling secondary jobs. Now it no longer works that way. You have always a very clear and straightforward objective.

[Herr M.] They went for the more RPG-like approach: Get your quest, go to your target, (most of the time) kill everything in sight, collect the treasure and return for your reward. Rinse and repeat, until you have finished all quests and unlock the final boss fight. This might sound a bit harsh, and the presentation is still far superior to the typical hack&slash titles, but compared to the predecessors the story is really bland. Well, at least they tried to include a couple of twists.

[Wandrell] The sidequests are mostly gone. And the few you can find just take a few steps, and then you unlock some new item. And by steps I mean the things you have to do, because the actual steps are not few. Even though travelling is now done through a map, and not screens, you end up wasting a lot of time wandering around. Even when in town you have to move around a lot, which added to the repetitiveness, makes it all feel like a chore more than a quest.

[Herr M.] I think the wandering wouldn’t be so problematic, if for one you would move a bit faster, and for two if there was anything to discover besides the few places you need to finish your quests. Or if those quests were a bit more involving. Well, at least there is an item which allows you to teleport back to your inn, which saves quite a lot of travelling time.

[Wandrell] Saves a lot of time, but also shows what they thought about travelling around. I must say that there is actually a way to travel and explore new places, a boat you can rent. The downside? How far you can travel depends on which quest you have to finish currently. The fisherman always has something to be scared about, and won’t take you much further than your next objective.

[Herr M.] Yes, sometimes the boundaries are far too apparent, and are a sign of the overall very linear story design. I think this would be less annoying, if there weren’t also some boundaries in the gameplay too, if you were able to have some kind of meaningful interaction with your enviroments. But for some obscure reason they decided to limit your actions as well. Basically you can only ‘look at’ and ‘use’ things.

[Wandrell] Not that you usually need much more. The problem is that they didn’t know how to handle this simplicity, the interface, and the game in general, lacks in communication with the user. For me the best example is the ‘activate’ spell. At first I thought you could use it correctly from the spells list, after all it has that option, maybe it was got an area of effect. Later, I found out you had to move it into the toolbar, otherwise it is completely useless. Why having the option of using the spell wrong then? And these interface problems extend to the controls. For example they don’t seem to know if they want you to move using the mouse, and end using things by accident (as move and use are the same icon), or with the awkward, but less prone to mistakes, keyboard controls.

[Herr M.] The controls could definitely use a bit more polish, especially in combat situations, were your options are a bit… limited. Basically you just click your enemies to death. That is unless you did put some points into magic and know how to use the right spells. But in the end it’s not that much of a difference.

[Wandrell] I just sent fireballs until they died. I must say there are a few nice things around, like throwing spears, which follow an arched path through the air, seeing enemies dodge ranged attacks, or how the environment can stop those attacks. But still, it’s very easy to kill even the hardest random monster, and very early.

[Herr M.] I think the main problem with the combat is, that it isn’t involving enough compared to how much of it there is. And there are some serious balancing issues too: Potions are way too powerful (instant healing!), and some of the spells are outright gamebreaking. Combine the hide spell with one of the area effect ones, and you can kill almost any enemy at your leisure.

[Wandrell] They try to fix this problem sending you hordes of monsters, and then there are some boss fights really long and boring. In the end, I preferred the one-on-one combat of the older games.

[Herr M.] They definitely were more personal. That’s also why I liked the fights in the game’s arena a lot more than those waves after waves of nameless minions.

Come to think of it, it’s a pity that they decided to put such a strong focus on being an action-oriented RPG, because this balancing act between Adventure and RPG was always the series main appeal to me.

[Wandrell] The game is half-baked. The RPG part lacks a lot, and also the adventure one. There are barely any puzzles around. I can think on the Icarus wings one, and you stumble on the required items easily. But apart from that, at best you just have to do a fetch quest.

[Herr M.] Like in the other games there are a bit more puzzles for the thief, which in general is a lot more interesting, since you aren’t that overpowered and have some nice sidequests.

[Wandrell] What do they get there? I didn’t play as one, but they always get their own quests on the guild of thieves.

[Herr M.] For one you can rob the bank, which is great fun. Then you can participate in a separate contest, which isn’t just another fetch quest. And you can yet again break into some houses. I thought this to be a lot more entertaining than getting yet another staff for the wizard, or killing even more monsters as warrior/paladin.

[Wandrell] So, how you think it sums up? We got the final entry on one of the best (or one of the few good) Sierra games. Loved for its great approach to RPG and its silly sense of humour, yet we get this. I personally say this looks like an underachievement.

[Herr M.] This game could have been so much more… and yet it could also be a lot worse. Yes it has a lot of flaws (we didn’t even mention the badly aged 3D graphics), some of them quite serious, but at least it does offers a kind of conclusion to the series. Just think of the many gaming series that never even saw a finale, or worse, had a finale that ruined everything that came before. At the very least you get the feeling that they tried and failed. And if you are willing to turn a blind eye on some of its faults, there is this certain, quirky charm. At its heart it’s still a Quest for Glory game. 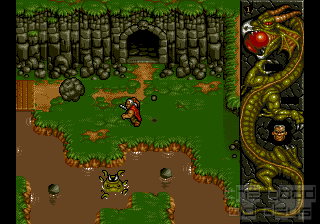