Beyond Columns
for PC (DOS) 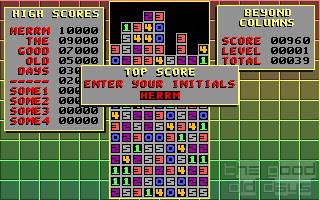 +++ Warning! Nostalgia Alert! The following review may contain – more than the usual – traces of idealisation and glorification. +++

Everything begins somewhere… This text started about three sentences ago, your current session in front of your computer right at the moment when you felt like diving into this brave new networked world. The idea to assemble some silicon, gold and other more or less common elements into circuitry, allowing them to busily move some 0s and 1s through virtual places, so the screen in front of you does not just gather some dust or mirror your friendly face, well this idea comes from somewhere around the middle of the last century. Of course the actual origins go back even further, but let us stay in the 20th century and with computers, or rather to be more precisely with first contacts thereof. From a strictly technical point of view, the game I am going to review today even qualifies as such: It is the first implementation of a Columns clone on an IBM Personal Computer.

But before we really get started I want you to ask a question: Do you remember the first time you played a game on a PC? Or your first try at Columns or one of its variants? I see, very interesting! If you would be so kind to make a note about this in the comments below (or in the forums above), I will tell you, as unsurprising as this might seem after the introduction, that this game, Beyond Columns, was one of the very first video games I ever played. At the very least it was the first one I played on our (then brand-new) first home PC.

I clearly remember how this grey-brown box stood there, with this bulky mini-TV set on top. Even though the setup on our living room table was still make-shift, it already had its very own, excitingly technological aura. Nervously, I stepped closer and stared at it with big eyes full of wonder. There it was: The Computer. While the strange roaring of the fans and the loud clattering of the keyboard were quite captivating by themselves, the actual fascination lay in the things beyond: A series of ghosts, apples and notes was about to slowly drop on a whole conglomeration of similar stuff.

But there was more to come: Idly waiting for the blocks to fill up the screen until they reached the upper edge was not enough, you could also move them at the push of a key. Today this might be absolutely nothing to write home about – actually it is even about to be outdated again – but back then it was sheer magic. The thought to do such abstract tasks, to move and sort objects which are not even there (at best they were an almost 2 dimensional thin layer of glowing phosphorous) was incredibly unusual, even if it was not all that new. The reward you got each time you put three or more similar objects together, this nice ‘bap’ sound and the newly won points, increased the fun even further. Let alone the joy of watching all those cascades of tumbling buildups you got after some more or less clever and considerate stacking.

Basically, the rules of the game are really simple. Yet whoever came up with the idea in the first place knew how to use this to the best effect. Me and my family did not care that this was not the ’real‘ version, that it was not the original game, but a clone: We just had a lot of fun with it. Especially trying to beat each others high score led to some entertaining rivalry.

As time went by, we discovered a couple of very nice extra functions: By pressing the + key the symbols turn into more absurd, convenient and/or useful objects, like numbers, letters or plainly coloured squares. The first time I found this out, I was afraid that something was broken (as young and naive as I might have been, I already had heard the one or the other tale about evil computer viruses). My mother learned that you could take all the time in the world to think about were to best place the blocks by pausing the game. Very much to my sister’s sorrow, who loved this game dearly and lost the long-time top place in the high score list due to this unfair advantage. And finally we stumbled upon the boss key, which made for some confusion and amusement, because it lets you decide which game you should be running instead. I just want to recommend to try the game itself.

As incredibly excited as I might have been and as long as this joy did last, eventually I stopped playing Beyond over the years. Partly because there are better versions of Columns, if not even better games in general. Partly because sooner or later everything starts to lose its charm. Actually I have not started it up in years (almost decades) and even for the review, I just grabbed some screen shots (although I still felt something of the old magic while doing so). The main reason being that I did not want to dissect, to rationally analyse it, but to try to describe how I felt about this very first PC game, this Beyond Columns and what impression it has left on me, as exactly as possible. Personally, I think in this case the latter was a lot more interesting.

Finally I would like to invite you to give this game a first try yourself. Maybe you will not be as impressed as I was back than. But since its ingenious simplicity makes it a rather timeless gem, you certainly will have some fun. 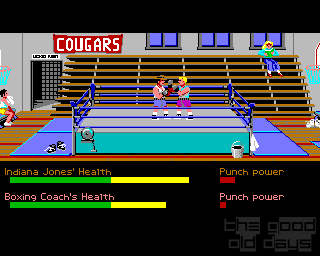