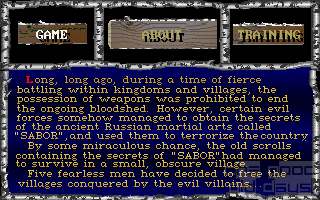 Here is a wonderful game – a simulation of hand-to-hand fighting created in a country that had been called the USSR. In the early 90s, the creation of computer games in the former Soviet Union still began to develop, and the game Sabor is one of the brightest representatives of the dawn Russian entertainment industry.

In the plot of the game, trouble came to the ancient Russia and a small group of young guys, five of them, decided to challenge the formidable and powerful opponents. Early in the game you need to teach five brave boys fighting, but in a rather Old Russian style of combat called “SABOR”, after which the entire group of volunteers go to war with the enemy.

The game consists of several levels, the first of which is training fighters (actually in five combat techniques). Practicing martial arts techniques in a duel with an instructor, you increase the force of each of the five fighters. The success of this training will determine the outcome of encounters with real enemies. After the training, all five men, seated on a cart, go on a long journey to do their heroic deeds.

It is worth noting the unusual gameplay, which shows itself in an original approach to managing fighters in group fights, namely:


The number of fighting techniques in the game is limited to six, those being two punches, two kicks and two protective moves (block of a punch and kick protection). No special attacks are included, but fortunately, the enemy uses exactly the same fighting techniques. Thus, forces are equal – the battle depends only on your reaction, fitness and your luck!

Having won the first group match, your team is going to keep fighting until the final victory. The game has nice graphics and wonderful music in Russian folk tune style. It should also be noted that the fighters who are hit are also voiced, which adds to the game atmosphere.

Winning and finishing the game is extremely difficult, so do not neglect the training phase and test yourself in all three modes: BEGINNER, INTERMEDIATE and ADVANCED.

On modern computers, it is recommended to run the game on the emulator DosBox.

I am speechless… this game is incredibly cool! It definitely has a very unique flavor, somehow its very silly but yet badass. Thanks for sharing!

PS: Any hints for the fights? They seem rather hard to me.

bucazoid:
Feel free to share anything about Sabor (1991) here!
[Reply] 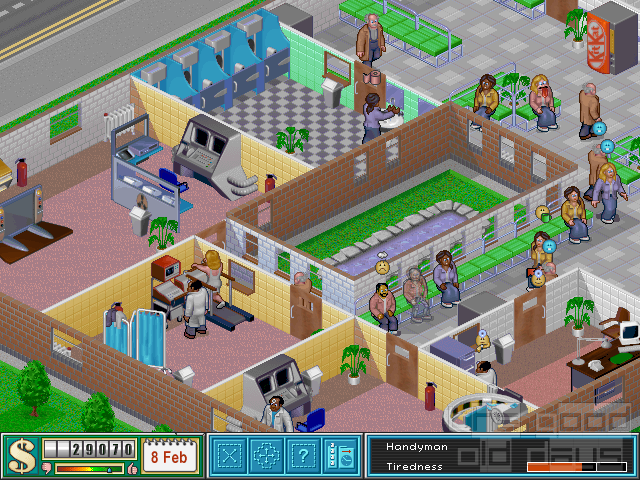