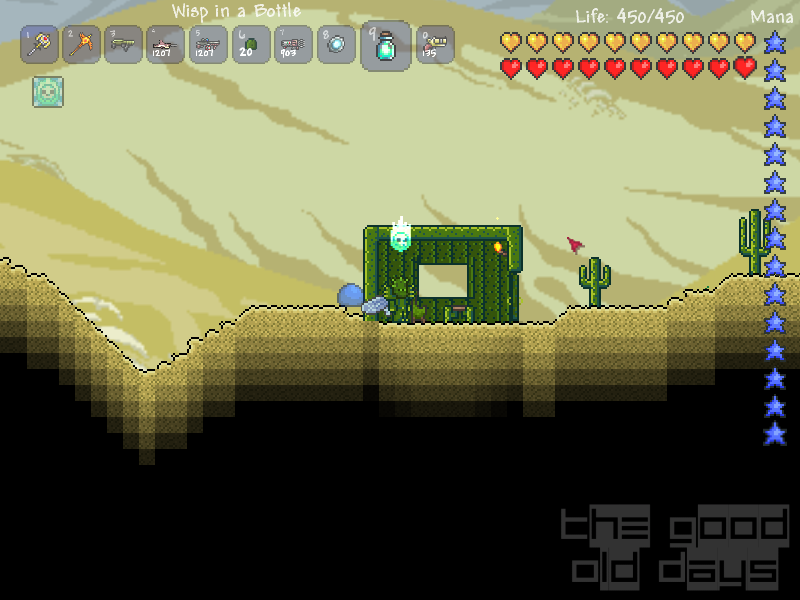 Imagine the beginning of a great adventure: You are standing in a forest. The sky is blue, the sun is shining and the wildlife is wandering about. There is a guy named Jack, Steve or Brat next to you, who will turn out to be an invaluable source of information, for he is The Guide. With great foresight you brought a set of tools along, so you can start right away. What will it be? Do you want to start digging, to search for valuable ores and treasure caves? Or do you want to attack that slime creature that is coming closer, in the hope that it will drop some valuables? Or how about building a base, maybe a log cabin, first? All of this is possible in Terraria, an open-world 2D platformer, that combines the fun of exploration, fighting and building in one game.

And in this game’s case open-world is no empty word: Terraria has no actual levels or quests to finish, but features huge worlds in which you can do whatever you want. The closest thing to levels are so called biomes, regions which share the same kind of landscape. And even though there are some boss fights, you do not need to do them to advance to a next stage: Almost everything is accessible at once in one seamless world. The only real limitation is your character’s equipment: Fighting some of the tougher monsters right at the start might be suicidal, but it is doable with enough stubbornness and/or luck. And you will notice that you need special tools to dig through some of the harder blocks. Naturally there are some technical limitations to your actions too, but there is so much you can do, at least it feels like you have all the freedom in the world.

So, what are you actually able to do? The most obvious thing is moving around. Mostly you do this in the typical way: Walk/run left or right and jump. This is greatly improved by being able to place and remove blocks on the go. With a bit of patience and creativity you can reach any place you want. Later on you get access to some special moves via items, like a grappling hook for climbing or wings for short flights. As might be expected for the genre you have to do some fighting too. While the standard Mario jump-attack does not work, you can choose from a myriad of weapons, ranging form the humble wooden sword, to the classic fireball up to the sniper rifle. There are roughly three categories: Melee, ranged and magic. Adhering to the proven rock-paper-scissor principle, each one of them has its typical strengths and weaknesses.

Yet, what is rather new and unique for the genre is the addition of crafting. We are not talking about some one time use gadgets here, no the game has an intricate system that lets you create almost anything you need on your own. Even though there are some items which can only be found in random treasure chests, most of the really important stuff needs some tinkering. And you have to gather some resources to do that. For instance: By cutting down trees you get wood, which can be used for houses and furniture. And by digging underground you find ores, which yield metal for much needed armour and weapons. And most of the monsters drop special materials which come in handy one or the other way (like slimes that drop gel, which is needed for torches).

There is an incredibly wide variety of materials – there are over 20 kinds of metal alone – which make for a huge amount of items to create. Overall there are something about 2000 different items you can find or build in this game. Trying to get them all and looking how to put them to good use is one of the main goals of the game. It will take you to the far reaches of the world, from deserts, underground caves, the ominous corruption, up in the sky or even down to the bowels of the earth (which holds a special kind of surprise). And some of the more powerful ingredients and items can only be won by fighting the boss monsters, which takes a lot of preparation.

While all that fighting, exploring and building is immensely well done and really entertaining in itself, the game’s greatest appeal is your ability to shape the world: You can literally move mountains! How about building a whole town, a castle or your own dungeon? Or digging a tunnel from one end of the world to the other? How does an elevator from the top of the world to the core of the earth sound to you? Do you feel more like blasting the world’s largest hole? Maybe you want to prepare an arena for the boss fights? Or flooding seas of molten rock with the ocean itself? The sky is the limit to anything you might come up with.

What better way to enjoy this freedom, than to share it with a couple of friends? For this reason Terraria also features a full-fledged multiplayer mode. And it is quite obvious that the game was designed with this mind. Setting up a server for either LAN or Internet play is really easy, yet there are more than enough options to satisfy any needs. The core gameplay stays almost the same, except that you and your fellow players play in the same world simultaneously.

While you can achieve a lot on your own, having someone that lends a helping hand, or just showing all that stuff you created to them, makes it even better. Whether by protecting each other while mining in the more dangerous regions, building larger structures a lot quicker or simply fighting side by side against the tougher bosses: Banding together results not only in a faster way to reach your goals but also in a new layer of interaction with the game’s world. It brings a certain kind of life to the game, that seems to be missing in single player mode. Because even if there are a couple of NPCs with some lines of dialogues, things get a lot more interesting when you can actually coordinate some tasks with your fellow teammates.

Admittedly with all the praise for the game there are also some (minor) complaints: For one thing mining does get a bit repetitive after a while, especially because the more valuable metals need a lot of (rare) ore to create their respective equipment. Secondly the boss fights are really difficult. If you are not prepared properly you will most certainly fail them. This would not be so much of a problem in itself, if it was a bit easier to trigger those battles. Thirdly there are special (aggressive) kinds of landscapes that start to spread and replace the normal ones. In the late game almost all of the world will be taken over by them and you have to make special preparations to keep them from destroying your houses/creations.

Still, it is a great experience, whether you play it alone or with a couple of friends. The gameplay is simple enough to be picked up right from the start, yet the overall game is complex enough to keep you interested for a long time. It takes the simple premise of typical platform games, and develops it far beyond the boundaries of their original, strictly linear structure. Therefore Terraria seems like the next step in the evolution of the genre. Nevertheless it keeps true to all the things that were so much fun about this kind of game in the first place. Quite fittingly the game is presented in a style very similar to 80ies Nintendo games, from the clean 2D pixel graphics to the catchy 8-bit music. To some this is simply the best.

To me the one thing I like best about Terraria is that you become player and designer at the same time. You can either just explore the world, take it as it is or tear it down and rebuild it any way you like. It is also the perfect example that a well thought out idea and real dedication are more important to creating a great game than state of the art graphics or an overly self indulgent story.

For capturing the spirit of the good old days, while updating it to more modern times and being one of the most outstanding games of recent times, it gets my highest recommendations. So pick up your pickaxe and don your mining helmet, it’s time to do some digging! 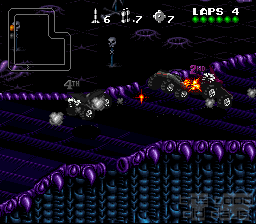