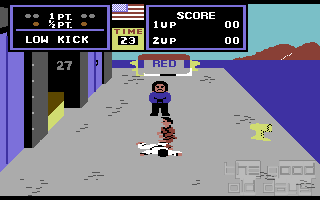 One of the biggest hits in the arcades of the mid-80s, converted to the C64. Most people will know the gameplay from International Karate these days (if at all), but Karate Champ was the game which started it all!

The name basically says it all: This game is about fighting. Not street brawls, mind you. Honourable duels in the high art of Karate! The americanized version of it at least. The fights take place somewhere in the docks area, right next to one of the big warehouses. Observing everything is some fat ghetto thug.

This guy serves as a referee. He grants points to the contestants based on their performances. To make it short: Everytime someone hits his opponent, he gets one point. Or half a point. Depending on what the referee thinks you deserve. To win a fight, you have to reach 1.5 points.

Unfortunately, the conversion to the most popular home computer ever didn't go very well. The gameplay is (in contrast to the original version) very slow. Animations are choppy. Controls (in spite of being basically excellent) are unresponsive.

Karate Champ is still a nice and entertaining game. Compared to later imitations on this and other home computers, it just hasn't aged well. The historical value easily justifies the interest it should get, though.