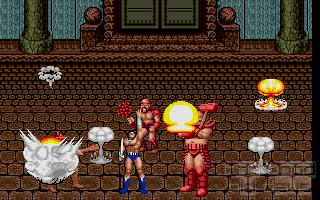 This review is a short overview of the peculiarities and specialities of the PC version of Golden Axe. For a more general description of the game take a look at our discussion of the Amiga version.

The first and most obvious differences you will notice are the graphics and the sounds: The slightly lower resolution leads to somewhat grainy images. Still, the colours are almost true to the original arcade version. The interface (e.g the health and mana bars, character pictures) is a bit less detailed, but still functional enough. Some of the animations have been cut too, most notably there are only three spells effects in the whole game, so Death Adder only uses the same ones as the heroes. For some strange reason only the game's music supports sound cards, while the sound effects always come from the PC speaker. And while those are not that bad (for the hardware they use), they certainly would have profited greatly from a proper sound device. Overall, as far as audiovisuals are concerned the port is not half bad, but if you want the game to look closer to the arcade original, you would be better of with the Mega Drive version.

The controls are definitely up to par though. They are as close as possible to the original, which means one key/button for each action and direction. All attacks work quite well, except for the jump attacks of the barbarian, which needs proper timing. There is one special advantage though: Slightly moving forward while repeatedly hitting the attack button breaks the attack sequence. This means you can keep bashing at your poor opponents until they drop dead on the ground instead of picking them up and throwing them away from you. One funny minor detail that works differently in almost any version of Golden Axe is the chicken mount, namely its attack. Here it hits only enemies directly in front of you and faces in the same direction after the attack.

If there is one thing that this port is ahead of the other versions, it is the amount of content and options it has to offer. For example: You can set your health bar from 3 to 5 points, and you have 3 or 4 continues, depending on whether you play alone or with another player. You can also chose from a lot of controllers. Even the mouse, which funnily works better than it might sound. Slightly less useful, is the sound and music tests. Well, at least it might come in handy if you want to hear that one particular tune. This version also features the final extra level and the definitely less original ending, but also the Beginner and the Duel mode. The latter one seems to be broken though, because after a certain fight it will always ask you for another disk, which simply does not exist. If you want to, you can even cheat: Just press the number key of the level you want to start in on the character selection screen.

The DOS version also has the dubious honour of probably being the most buggy one. Things like dropping through the floor after a jump or enemies getting stuck until you hit them tend to happen. But the most annoying one is when one of the blue guys gets stuck in a wall and can not be moved to leave the screen, which means you are stuck. Still, on most of your playthroughs you might not see any of those problems, but sometimes you will witness the one or the other glitch and occasionally you might be forced to restart.

Generally speaking with all its faults and shortcomings it is still my favourite version of Golden Axe, mainly because it has the biggest variety of extras and the best controls.

Attachment: gaxe-1547286803.png
Herr M.:
Yea, the framerate can be a bit choppy even with DOSBox or superfast machines (or as fast as the last machines than ran some kind of DOS got). It can be helpful nevertheless: Sometimes it turns into a kind of 'bullet time' where you can perfectly place your hits.

Moebius:
Quote:
Framerate is not perfect

Moebius:
Great game. Too bad there were no sequels on PC, those were quite entertaining at least on SEGA.
[Reply] 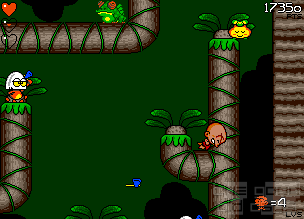