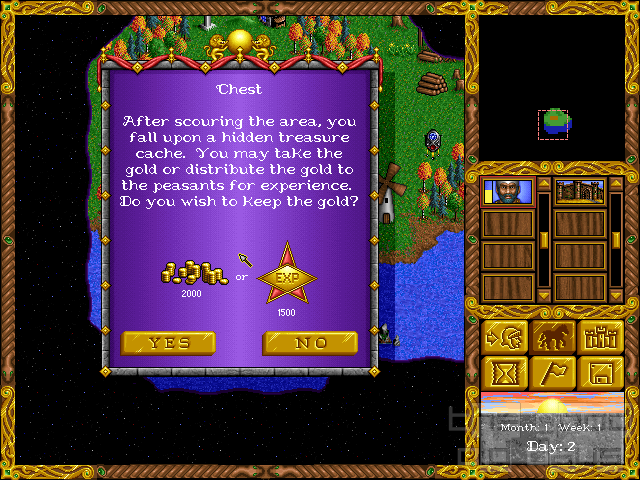 King's Bounty got a facelift and was combined with the popular Might and Magic series in what somebody thought it was a nice idea. And I don't say it wasn't, they took one strategy game that didn't fare so well and revived it with their best-selling franchise, a common move. It's just that I doubt they expected this to end being their new best-selling series.

And it couldn't come at worse time, the year 1995, the same one in which the Playstation appeared, bringing an age of fast 3D games, where old 2D strategy had no place. People just wanted to turn-on the game and start playing at the moment.

There is a very naïve solution to this problem, just make a game that is easy to learn, yet at the same time keeps all the complexity of a strategy game. It sounds like like a childish joke, yet that's exactly what they did. Most strategy games were a mix of several intermixed systems, where you had to take control of everything, from production to combats, at once.

So for solving it they just divided each part of the game in a separate layer, that way instead of learning how to handle a big and complex machine all you needed was to learn various small games.

Of them the main pillar there were the battles, as it was to be expected. They inherited from King's Bounty a sort of tabletop look, where you move your troops through tiles in search of the enemy. There is a bit more meat than that, of course, as for example there are spells to be cast, and a simple, yet effective, morale and luck system, which can make your units get extra turns or cause critical wounds.

But that actually connects to the next layer, which is the heroes management. These are the moving force of the game, as they carry your troops, and also have an advancement system based on experience and levels. Raise them and you will increase your troops efficiency in battle, or your hero's spell power. Even though the mentioned morale and luck are part of this, the effects are not as direct, because it is affected by the artifacts your hero carries, the mix of troops he has and, also, by random events found while exploring.

What you explore is the overworld. At it's core it's just the level map, but include lots of places to visit, monsters to battle, castles to capture and, of course, mines to take. Forget about them and you won't have any resource to expend.

Expend where? On the castles, the last layer of the game. These are your headquarters, where you create new buildings to unlock the creatures and services they offer. Each castle has a theme, which marks the units you can hire, from the enchantress and their fairies, to the knight and his armored troops, including, of course, the wizard and his dragons, but otherwise they are all mostly the same.

And now, knowing all this, you only need to tackle on your enemies, which require finding the other castles around the place, so you can capture them until you get bored because nobody can stop you. But that the usual problem with computer players, isn't it?

Luckily there is still another thing I haven't said, and it is a great part of the game's success, because it is really good that the game is well designed and fun, but one of the strongest points of this game is how easily you can start playing against other people. As fast as you prepare a game against the AI, you can prepare one against human players.

And that is, actually, which made the game so good. Being able to play a fun game is, well, fun, but being able to play it against friends is better. Sadly, as it is usual on turn based games, finishing a scenario can take a full day. And that is if you even manage to go up to the end.

Herr M.:
Actually having to stay on edge makes this one of my favorite strategy games. Sitting the battles out just isn't an option, because turteling (often an all powerfull solution in other games) doesn't cut it: You might fend of one attacker but if you don't take the initiative the next one will get you. You have to get what you can as fast as possible, every little bit helps. And this makes logistics almost more important than the actual battles.
Wandrell:
We all had that problem, but I suspect the idea was playing fast. You build your strength, and attack the other players as soon as you can. Nowadays that mentality is more common, due to boardgames and fast multiplayer games, but back then, comming from normal strategy games everybody expected hoarding to be the best strategy.
Mr Creosote:
What has always bothered me about this whole series is how the concept inherently disadvantages careful playing. By the nature of the rewards, the treasures, the mills/mines etc., every success you make early on will potentise. So you need to stay just on the edge, in permanent danger of losing your whole army all the time, because taking the time to build up the ranks will cost you all-important treasure and experience. Of course, this also means you better not leave any creatures behind just to protect your cities, because unused potential is dead potential. It's incredibly frustrating in this way.
Wandrell:

Here they hit jackpot. But I have the feeling that it was mostly luck, and the next games would change little of it.

The second game added a bit more of complexity, which actually helped the game making combats more interesting, and brought things such as improving units or a super powerful artifact hidden in the map.

The third improved the hero advancement system, adding skills and a more advanced inventory. But sadly the graphics are very ugly.

Currently there are six installments of the series, but I haven't even tried the newer ones, so I don't know how they are.

Mr Creosote:
Yes, well, it sounds much easier than it actually is to get this right. Balancing different elements, making them work together is a very delicate task. Just look at Star General to see how wrong this switch between a global and a local strategic level can go.
Herr M.:
Quote:
So for solving it they just divided each part of the game in a separate layer, that way instead of learning how to handle a big and complex machine all you needed was to learn various small games.

Quite an interesting point, never thought of that. But I guess that what makes the series such a perfect blend of RPG and strategy: The single parts aren't that overly complex, yet they influence each other in a subtle way, that is the actually difficult part to master. 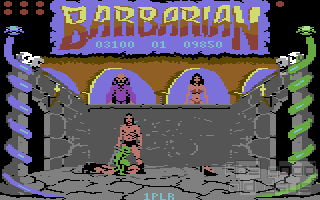