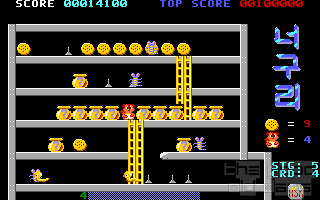 This game is extremely easy to learn and the interface is user friendly. It comes from Kyunghee University, South Korea, but you need not be afraid of the language problem. The game is a bit known in that country, but it is almost unknown outside of South Korea. Yes, this game was made after the famous game Ponpoko (1982, made in Japan).

All you need to know about key control is: cursor key is used to move or to ride a ladder, space bar is used to make a short jump, and cursor key + space bar simultaneously is used to make a long jump. If you eat all the food in a stage, the stage is cleared and you begin in the next one. You have to jump over nails, gaps, avoid centipedes and worms, ride ladders to eat the fruit.

Unlike Ponpoko, two kinds of jump are available. For some gap, only a long jump can save your life. Also the movement of raccoon is much softer than in Ponpoko. This introduces many possibilities and rare methods to clear the stages. And the movement is so cute, cuter than previously in Ponpoko.

The bad things? Yes, there is a bad thing. The difficulty does not increase as you proceed. I mean difficulty generally increases, but the relation between stage and difficulty is not that strong. Also I would prefer if the game were more difficult. This game gives you 6 lives for each credit and 5 credits. If one has fine control, it will not be that hard to see the ending in 2 weeks. What is the final stage of the game? 50 stages.

If you beat all 50 stages, you are in the 51st stage, but it is the same as stage 1. Once I turned the game twice, making it to the 101st stage. I hoped the game would produce some new stage, but it didn't.

Platformer + comes from an exotic country = my kind of game

Seems a bit hard though. Any hints?

E.g.: How do you avoid those worms that come out of the '?' urns and is there any way to jump over enemies?

Anyways: Thanks for sharing! 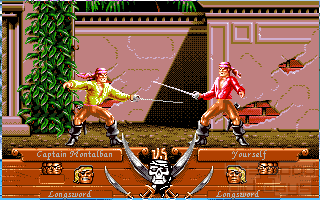