Return to Zork
for PC 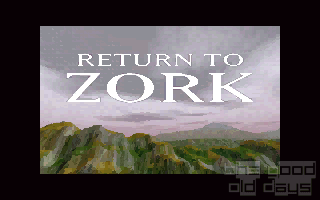 Text adventures and the 1990s are not exactly a standard association. Though if you think about it, Beyond Zork and Zork Zero had been released in the late 1980s, so when Return to Zork was announced, they were still relatively fresh in people's minds. As bad as Activision's image might have been with the old Infocom fans, they did try to keep the properties alive. Their previous attempt to bring one of the old classics into the present had, admittedly, crashed and burned: Leather Goddesses of Phobos 2 turned out to be a rushed, buggy mess. It was also the last time one of the original Infocom designers was involved in the design process.

So, Return to Zork was made without any big names and it was doomed to work – otherwise, it would surely have been the end of all those Infocom brands. And it had to do the balancing act of attracting new players as well as pleasing the old fans. Consequently, the game shows its roots, and I'm not even talking about the intro sequence which fades from the famous textual beginning of the original into a graphical representation of the same scene; neither about the numerous allusions which pop up everywhere. 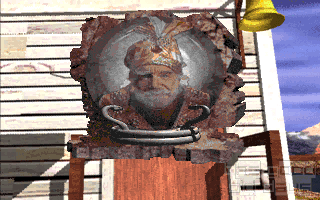 It is indeed the game structure which is closely reminiscent to what the veterans of the time were used to. First and quite importantly: Return to Zork expects that its player wants to play the game! There is just the hint of some backstory about people and buildings of a formerly thriving holiday resort vanishing without a trace. Though what does the protagonist, a stranger, have to do with all of this? The game relies on the player's curiosity and willingness to just explore this world, poke around until he finds the core of this mystery. There are no big mission communicated or short-term goals set. Modern-day players who insist on a clear target for the purpose of immersion ('Why am I doing this?'), those who are not willing to explore a large, largely empty world, are left behind almost immediately.

What you'll meet in this world is the expected collection of strangeness. Not much in this world makes much sense in the classic meaning of the word. There certainly is no logical explanation for why these locations are assembled the way they are. Neither why they are inhabited by all of these goofy characters. Or why there is a magician talking to the player through a magical orb, seemingly a sort of guide through the game, but actually more of a big teasing mechanism, when he pops up to say things like: '…and that is the only way to get out alive. Remember it when the time comes!' It is the cranky humour which Zork has always been famous for.

Nevertheless, this was supposed to be a revolutionary step for the series. The reason obviously being that the designers did away with text almost completely. Where the previously mentioned LGoP2 had full screen graphics and a mouse-driven interface, its storytelling was still performed almost exclusively through (long-ish) blocks of text. RtZ makes a fairly successful attempt to get its information across in a purely visual manner. Even dialogues are controlled through graphical icons and only audible in spoken form; there is not even an option to have subtitles. 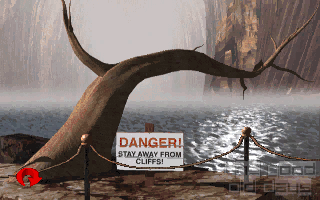 In this vein, the interface uses an approach which attempts to bridge the demand for freedom (from the classicists) and the need for guidance (from the modernists): All verbs which could make sense are selectable per object (or object combination). So, for example, in the very first location, a vine could be examined, pulled out, cut, dug out or eaten. The big sign, on the other hand, might be read. Not that this prevents the player from doing stupid things: Destroy a crucial object and the game will still let you carry on, without any way of still winning.

This system, similar to what Legend Entertainment introduced at the same time in their first predominantly graphical game Companions of Xanth, may be the most successful compromise between the two worlds the game makes. Many decisions inherent in the game design, as described, are still very old-school. The lack of clear guidance, goals and a coherent world and a narrative which does not take itself seriously in the slightest was hard to swallow. In 1993, characters like that magician from the orb, although clearly meant as comic relief, may even have been seen as offensive and annoying by players not used to a game basically throwing abuse and insults at them if they don't progress. And for every (commendable) alternative solution to a puzzle, there is also a nasty way to die or a non-obvious dead end. 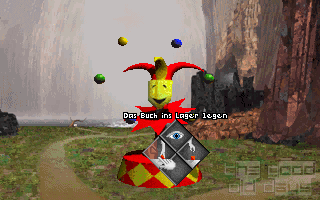 So RtZ can very well become frustrating, but maybe it was, after all, geared more towards the older fans? Well, the rendered graphics (which are, honestly, quite ugly in places) rob the players of one of the strongest points of the classic Infocom games: the textual descriptions of the locations, the objects and the actions. Infocom didn't just excel with its excellent parser; their games were simply well written. While a little bit of this is carried over into the dialogues, much of it is painfully missed here.

Make no mistake: In spite of being set in a completely different part of the world, this game is probably as close as you could get to making Zork in a graphical manner. There are simply un-unravelable contradictions. And the changes, as major as they may seem, are really just on the surface. The style of gameplay and, maybe even more importantly, the tone of the game try to appeal to the existing fan base. A bit of a strange decision, considering Infocom's business had folded a couple of years earlier, indicating that that fan base might not have been big enough anymore.

But maybe that was the idea, after all? To see whether the general game design principles were still sound and combining them with new game mechanics would be a viable business model? Given the novelty factor of the 'multimedia' presentation, it worked well enough to warrant a number of sequels, the first of which departed from the original games much more radically. But that is a story for another day…

I remember that I got this game as part of a collection of Zork games for christmas around 1998. I had never heard of the series (let alone Infocom) before and was kind of surprised that the older ones were text adventures. Actually I remember to be even dissapointed about this fact, but hey there were still two graphic adventures, so this present wasn't a total loss, was it?

Well… this was around the time when DOS became obsolete, so try as I might: I just couldn't get Return to run (as always it must have been something about too low memory or something in the vein), even though that letter in the manual made it sound so great.

Years passed and it was always buried somewhere in my gaming collection. In the meantime I heard a lot of bad things about the game, like how hard it was and how horrible the acting was supposed to be.

Then, sometime after DOSBox showed up, I finally gave it a try… and hated it immediatly. It wasn't just that it did feel neither like the old text adventures (which turned out a lot better than I had though) nor like Nemesis (which is a story for another day), or that it looked terribly aged… it was the German translation that put me off. As far as I can remember already the installation program was horrible gibberish (the most primitive translation software couldn't have done worst) and it didn't get much better after that. I gave up on it after playing it for about an hour or so. Maybe I will give the English version a try sometime.

Mr Creosote:
Feel free to share anything about Return to Zork (1993) here!
[Reply] 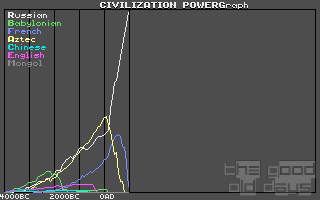