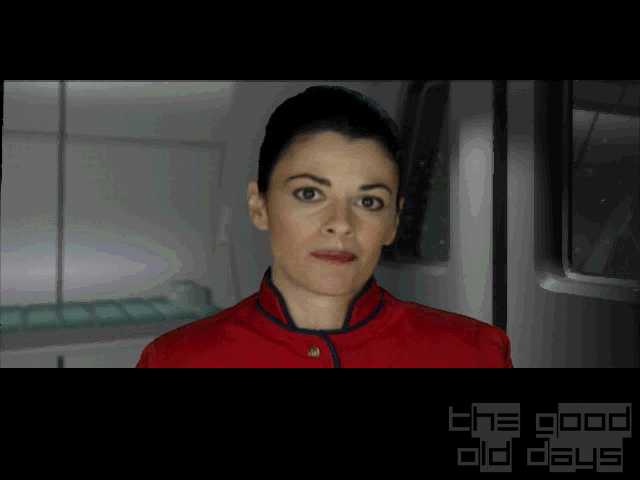 Gateway 2 had been Legend Entertainment's last predominantly text-based adventure game. Then, the series jumped forward and became the first of the short-lived third generation Legend games. Oh, and it was called Mission Critical (without Gateway anywhere in the name). In spite of the missing licence, its heritage is quite noticeable. The player finds himself alone on an abandoned spaceship, in urgent need of repair, with many initially blocked off passages and bound for an as of yet unknown mission in an unknown part of space. Hm, maybe this isn't a sequel, after all, but rather a Gateway 2 remake with new graphics and a new interface?

Since it was released at time when hiring third-rate actors to appear in your games was considered trendy, Mission Critical begins with a lengthy intro sequence which explains why there is nobody left on board at least: In the most long-winded fashion imaginable, we are told about the ship being attacked by a United Nations battleship of superior firepower. The captain – who, if the cast list is to be believed, is played by Worf, though of course he is unrecognisable without his silly face makeup – cooks up some ridiculous plan which involves pretending to surrender, but then bringing a large bomb on board the enemy ship to destroy it in a large self-sacrificial move. Though he leaves one crew member on board to 'fulfil the mission' – the player. 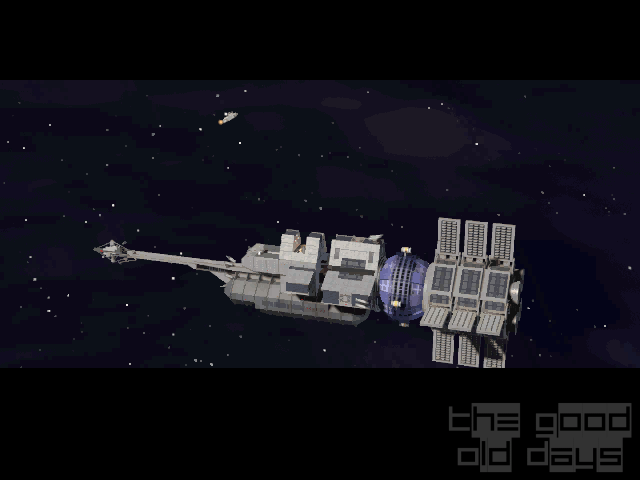 Problem is, there was apparently no time to tell the player what said mission even is. Though there was time to record more lengthy video messages intended for him giving him detailed instructions how to fix the damaged ship structure – a task which the board computer could have easily been consulted for instead. To make things even more confusing, although the intro goes on and on and on, it never even touches upon essential questions such as:


All information which the protagonist (who also remains frustratingly uncharacterised, presumably to serve as a projection space for the player in a 'faceless adventurer' way) would already have, which consequently should be provided to the player to understand his situation.

All of this is only revealed subsequently: Apparently, there is a war between the 'Alliance' and the UN over the use of technology. The UN seems to have turned into a quasi religious organisation which believes that technology will be the end of humanity. Therefore, they are trying to stop all sorts of scientific research – and your ship was escorting a group of scientists. So, essentially, the UN have become the Retros of the Wing Commander universe. And they came at us with a technologically superior ship, in spite of their belief. Even later, it turns out the mysterious mission is all about gaining access to a new weapons system which might turn the tides of the war which is currently not going in your side's favour. Suddenly, I dislike this 'Alliance' as well. 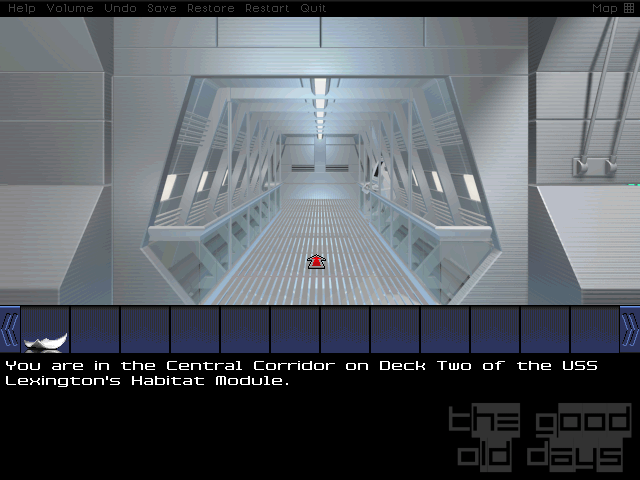 The first tasks at hand are much more straightforward, though. The battle has punctured the ship's hull. OK, so we better get the hull repair kit (literally called that) which comes with clearly written instructions ('apply the blah, then glue the blah blah blah') and use it. Also, the ship's nuclear reactor is overheating. Let's activate the backup cooling system, then. If you're feeling bored, you can always go through the underwear drawers of the female crew members. Oh, wait, you can't – their wardrobes just contain 'many clean uniforms'.

There is certainly something to be said for tasks like this. They are straightforward and their solutions are worldly and logical. It's just that they are not particularly interesting. Most of the items you will need are exactly in the places you would expect them and their usage is also obvious. Radiation is leaking out in some corridors on the way to the reactor and you probably don't want to be burned by it. So you get a Geiger counter from the store room to warn you where to tread carefully. You need to weld something, so you get a welding torch – and use it in a single step with the verb 'use'. And this is not just a strategy to ease the beginning of the game (Remember the smooth first scenes in Gateway 2?); it goes on exactly like this. An example from the late game: You need to enter a citadel, but there is no entrance. Conveniently, a large cannon is standing right next to it, already pointing at the wall. So, uh, switch it on and fire it? 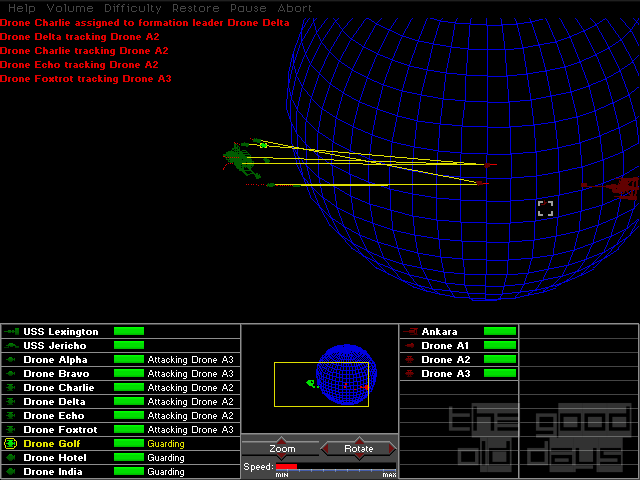 While the puzzles may not be a major obstacle, the controls and graphical representation of the locations do a fairly good job of that in a couple of rare, but noticeable places, unfortunately. The cold, sterile render look is generally appropriate for the lifeless spaceship corridors. In a later stage, on a planet surface and in its deep caves, not so much anymore. Only in the final stage, back on earth, it is appropriately replaced by beautifully hand-drawn imagery (possibly intended to show the switch to another reality level).

Just that about 70% of the time is spent on board the lifeless ship devoid of visually pleasing details. There is a lot of distance to cover between the nine decks, walking back and forth again and again. The game has the decency to make the walking (or rather, as usual in these pre-rendered games, floating) skippable. What it does not manage is to give a sense of location and perspective. There is no real freedom of movement; turns are sometimes 90°, sometimes 180°, with no clear indication in the icon. Also not in the visual transition, because turns are not really animated. Instead, the new picture just pushes the old one out – i.e. one flat image replaces another, making it hard to measure the degree of this turn. 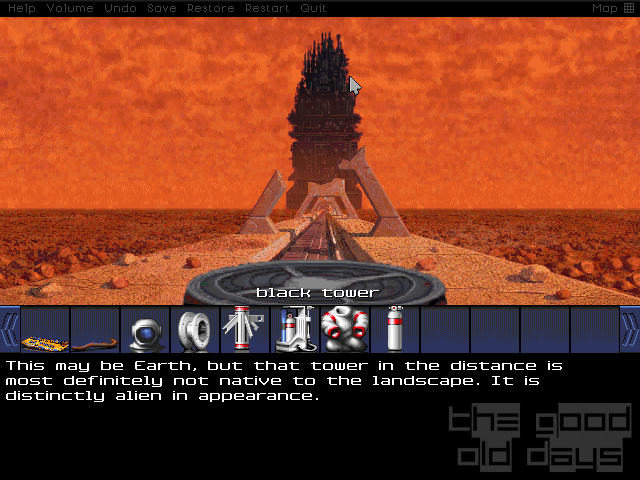 Which direction am I looking to now? The in-game map sort of helps, but why does this map not have room names? Why can't I just click on a room on the map to jump there (provided the room is accessible, of course)? And why is that map not available where it's most needed: When the player is blindly stumbling around on ship's the outer hull to do some repairs? Where, as usual, the actual repairing is a piece of cake, but finding the way back inside turns into an annoying chore!

Between this (mostly) unoffensive, but also fairly unexciting gameplay, the plot, which wasn't even introduced all that well in the first place with all those major questions left open, simply stands still. The only information that the player is fed is the bare essentials mentioned above which should have been clear right from the start anyway. Then, right there in the middle, there is a lengthy conversation scene when the player managed to fix the ship's communication system which finally moves things forward. Then there is nothing again, until the very end – and again, things appear in the form of an absolutely endless, virtually non-interactive monolithic conversation scene.

And this brings us back to the question of being a Gateway game: The game's structure, especially with the long explanatory scenes in the end-game (including deliciously weird virtual reality sequences), as well as the initial setting are not just strongly reminiscent of Mike Verdu's earlier designs. Just lacking the rich plot background the Gateway series provided (both externally through the books and in-game) and minus the intelligent puzzles, but adding one game feature which does save the game from total mediocrity: The otherwise clean adventure structure is interrupted by tactical space battles in two situations. Lightweight tactics with intuitive controls and ultimately well playable. Skippable if you absolutely want to, but you'll probably miss the most fun you'll have gameplay-wise. 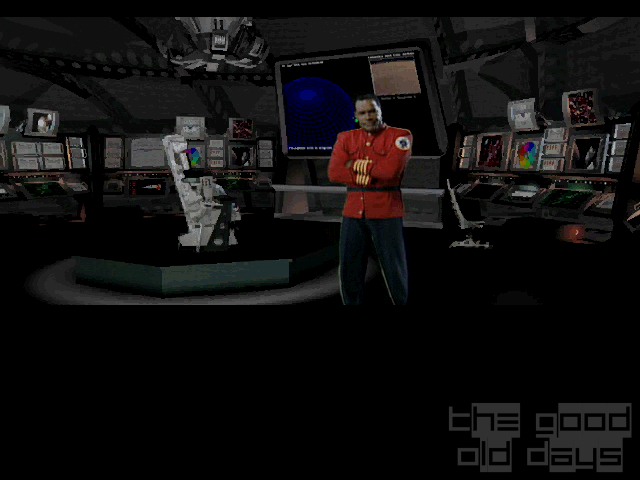 Finally, what is the plot, which the game only reveals so sparingly, really about, then? The thing is, for the most part, is just appears to be an embarrassingly stupid story about a war of the forces of good ('Alliance') versus evil extremists ('UN'). Only (literally) in the very last sentences spoken in the game, it somewhat gets its act together, by designing each of the two possible endings (apart from an untimely death) in a deeply ironic way. The game's final choice is basically about siding with one of the factions, and each path intelligently leads to a (mild) cross-confirmation of the respective other standpoint. Not that this makes things really satisfying in the way of ethical philosophy, because the the few relevant choices asked of the player still barely scratch the surface of the actual issues and especially the causality between the protagonist's actions and the final outcome is questionable to say the least. Also, the plot glosses over many major points – for example the question why the protagonist never suspects whether the characters he talks so elaborately to at the end might not be telling him the truth, whether they might have hidden agendas (apparently, having calm and soothing voices is sufficient proof…). It has to be admitted that the game at least tries to make a point about human nature in general, but it is not particularly successful. Most of the pseudo philosophical talk is just a smoke screen: big words, but little meaning. Or maybe high aspirations not quite working out?

Which could be said about many things in Mission Critical. There is one observation which sums all of this up very well: In the second (and final) cutscene involving the ship's captain, he's standing on the bridge. Alone. There are chairs and computers waiting to be operated there. He's even talking to other people who are obviously meant to be in the room, but they are nowhere to be seen. How is this significant? Well, if you go for high production values, it should be obvious that apart from your 'name stars', you will also need extras. Instead, the captain is just standing there in his stiff pose, in the middle of computer-generated surroundings, visibly uncomfortable. How hard could it have been to put two random employees of the company in fantasy uniforms and just have them sit somewhere in the picture, maybe with their backs to the camera or something? Why didn't anyone think of that? Mission Critical has all the fundamentals of a big scale production, but it doesn't deliver on a couple of key points – while dropping a couple of qualities which had made the predecessors so good. It didn't go horribly wrong, but it didn't all go right, either. 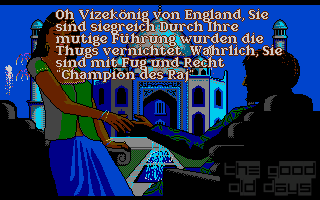