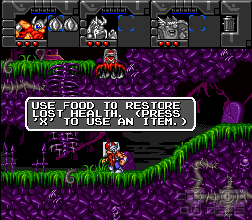 The story continues from the first part. Outraged by his defeat, Tomator finds the offenders sailing on the ship and teleports them immediately to the guard robot. Due to a system error, the lights go out and the prisoners take this opportunity to attack the confused robot. And dismantle him for parts, to get them for themselves. Then one of the Vikings (Olaf) presses the button "Start" on a time machine, thinking that it said "Snack". It should be noted that the game is made with the traditional humor of the series, so it is difficult to take the story seriously.

Mr Creosote (2014-12-23):
Apart from this being the SNES, not NES, the IBM version indeed has completely different graphics. The SNES look is much closer to the first part while the other one has this typical plastic early '3D rendering' look. See here: http://www.mobygames.com/game/norse-by-norse-west-the-return-of-the-lost-vikings/screenshots.
Moebius (2014-12-23):
I believe that you played the first part of it, and this one was made for both NES and PC, and something tells me that their graphics are identical

Herr M. (2014-07-02):
Cool, I didn't even know that there was a version of this game with decent graphics. I only played the PC version once and while I liked the improved gameplay I gave up on it because of those horrible pixelated plastic imitations. Thanks for drawing my attention to this.