Fist 2: The Legend Continues
for C64 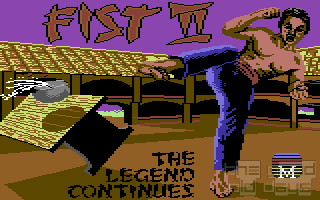 Karate Champ, The Way of the Exploding Fist, International Karate - how can anyone manage to drive these great games into the ground? Is it even possible? Unfortunately, the answer is yes.

Fist 2 mixes the fighting style of the mentioned games with a more 'freestyle' approach (which would later become Double Dragon). Instead of duelling, the protagonist walks around freely in a landscape. From time to time, he meets an enemy whom he then beats up.

Where's the problem in that? For a seemingly dynamic environment, the fighting is too static. While still ok seen for itself, it just doesn't fit to the rest of the game. Walking through the sparsely decorated settings is simply boring. Nothing ever happens, and due to the controls, it can even get frustrating - or do you like being forced to climb up five ladders again, because you fell into some hole (which by the way didn't even serve any purpose for the game)?

The 'adventure elements' (if those can be called like that) only consist of collecting randomly placed stuff. As if that'd save anything.

Producing an identical or similar sequel just to make some more money is certainly not the greatest way. Using a game's good name to sell a crappy and different game is even more detestable, though. What were they thinking when they made this? 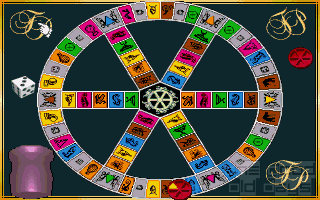