Fairlight: A Prelude
for ZX Spectrum 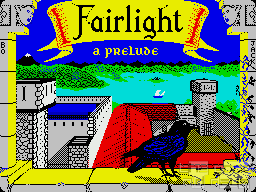 Dark forces came upon once happy and prosperous Land of Fairlight! You, a brave and daring adventurer named Isvar have been summoned into the castle, which was once controlled by benevolent King Avars, but is now empty of its former household and filled with foul entities. Turns out the king has been long banished (and probably dead). But the rumors have it there's still one member of the royal family left in the castle, Segar the Sorcerer, whose days are countless, for his knowledge and skills have granted him immortal life, but he is now imprisoned deep within the compound. Your task is to find and set him free, for only he can bring the light and felicity back to the land and restore its former order.

Well, easier said than done, 'cause there's a lot of things that stand in your way, which are many dangerous foes, traps and puzzles that you must work around, but thank goodness no time. I think there's also the so-called Book of Light, that you must find for the sorcerer to successfully work his way out of the castle (and yours too for that matter, for the gate has shut behind you and there's no going back unless you succeed in your mission), but with all honesty… I'm not sure, for I never managed to finish this game. Which is kind of a good thing, 'cause I'm still looking forward to it.

Alright, laddies, another peculiar Spectrum game worth reviewing. This one came out in 1985, traditionally for three rival platforms of those days: Spectrum, Amstrad CPC and Commodore 64, where the Spectrum version was still victorious. However, quite frankly, I noticed little difference between all three, except for slightly different musical rendition and sound effects. Although CPC, once again, decided to add a little extra spice to it and came up with a considerably diverse palette, which, nonetheless, didn't make it look better, as in many other instances of CPC games, where improvement as such just wasn't the case. Anyway, the Spectrum version in turn provides us with two subversions, 48k and 128k, which, seriously, makes no difference except that 128k version has music played infinitely during the game (other than intro one) and also a few sound effects are added, I think, which by no means embody Spectrum 128k capabilities, and in my opinion is but a redundant and irritating supplement. Oh well, what's done is done.

Speaking of music – the intro soundtrack is quite remarkable! I would actually enjoy listening to it for quite some time, at least while it played, for although short, it wasn't just your typical painfully synthesized tune of 4-5 notes, stuck in an endless loop (exactly the one played through the game in 128k version!), but an elaborately composed and stylish melody with clearly distinguished intro, bridge and finale, and it also had this distinct baroque vibe to it, which is romantic and memorable.

The graphics of the game is certainly what makes it a great treasure. A very nice and catchy 3D isometric perspective with a wide variety of high-detail elements, which contributed significantly to the realism of the gameplay. There are different doors, ladders, chairs, tables, barrels, teapots, cups and many other objects, which probably won't fit in this review. Mind you, there weren't as many games like this on Spectrum, even if some kind of looked like that. They didn't for some reasons I can't quite articulate. Let's just say, in this game everything feels more “real”. At least the castle is designed as a real castle, and not just a set of identical square rooms severed by walls. No, that's definitely not the idea behind Fairlight. Textures and sprites are both simple and complex, which is a paradox that marks out this game.

Now to the gameplay. Unlike any IBM PC adventure, this one doesn't leave you with the feeling that you're being guided, watched, directed and might be assisted in times of trouble. Here you feel completely lost and on your own. Yes, that's another bit to the game's realism, although shared by most Spectrum games, as I've already mentioned in my other reviews. There are no hints, talks with the characters or profound scribbles on the walls such as “Ken sent me”. C'est la vie. Which was probably the motto of most Spectrum game developers. And I think this is something to learn from today.

Anyway, there are still some comforting things in the game, such as keys. Somehow they really do suggest which doors they belong to. Also, just like in other games here you may find a lot of objects which may or may not be of any use. You just don't know that, so you have to carry heavy bulks in your backpack, which magically stretches, when you put there, say, a barrel. That would sound not quite realistic unless I'd also mentioned that every object in the game does assume size and weight, which means you can carry only a limited amount of heavy objects, and a greater amount of light objects, which is 5 maximum. You can also move almost every object in the game, some you can only move, but never pick up. By the way, barrels, chairs, and even plants can be used together in order to climb up to objects which are out of ordinary reach. Also, this very thought must cross your mind first. Especially when things don't even appear pickable such as the crown on top of the castle's gate. Moreover, by moving things around you can entirely change any room's interior. I remember making me a cosy little nest in one of the chambers by rearranging it to my liking, and also bringing there stuff which I might need in future. It was my treasury, so to speak. Incidentally, some objects can be used immediately by pressing the related “use” key, but some apparently must wait their turn and be properly sacrificed.

Now we shall speak of enemies. Those are sufficient in number and pose different amount of threat. Some are immortal, and some are temporarily rendered harmless, unless special measures are applied. For example, you can never permanently kill a guard, unless you pick up his helmet, which remains after you killed him and feed it to the nearest twister. The latter is indestructible, yet of no immediate threat, as it doesn't really seek to harm you in any way. However, a close contact is not advised as it may “sting” you slightly. Also, it can absorb any object in the vicinity, which might happen to be your accidentally dropped keys or any other valuable items, which may often mean… GAME OVER! The bubbles and trolls can be permanently shut off by dropping an object on the spot they last appeared, as they attempt to re-appear each time you enter the same area. Not sure if it's the real solution or just a weird glitch, but it works. Dark monks are immortal and very dangerous, as they not only drain your energy, but also resist you with great thrust and your mighty sword here is no good. The only thing you can do is to avoid them, and the only death for them is to slip off a bridge.

In conclusion I can only say that this game here is an absolute masterpiece of 20th century, that lacks little, offers a truly unique and spectacular atmosphere and unquestionably ought to be included in the Spectrum's top adventure list, should such exist of course.

Moebius:
Quote:
So, did I get this right: When you kill a guard it drops a helmet which you have to dispose of in the twister or he will respawn? Sounds a bit contrived… but also rather cool.

Yes, and i remember doing mass cleaning in the castle, by killing all the guards i saw on my way and discarding them like this, so that they would never bother me again

Quote:
Btw: Can't quite put my finger on it, but somehow the graphics remind of the Game Boy. Maybe it's just the yellow colours and the low resolution.

Well, it surely does look outdated today, but somehow this game gave me different feelings back in my time. I'm not really sure what it is. Perhaps it's the atmosphere which somehow stimulates your imagination and mentally enhances the poorly developed scenery of the game. I'm not sure. Eitherways, it's not a typical spectrum isometric game as it would always get out of line somehow, and it was noticed not only by me, but many spectrum veterans.

Herr M.:
Originally posted by Moebius at 05:50 on July 16th, 2014:
For example, you can never permanently kill a guard, unless you pick up his helmet, which remains after you killed him and feed it to the nearest twister.
So, did I get this right: When you kill a guard it drops a helmet which you have to dispose of in the twister or he will respawn? Sounds a bit contrived… but also rather cool.

Btw: Can't quite put my finger on it, but somehow the graphics remind of the Game Boy. Maybe it's just the yellow colours and the low resolution.

Moebius:
Feel free to share anything about Fairlight: A Prelude (1985) here!
[Reply] 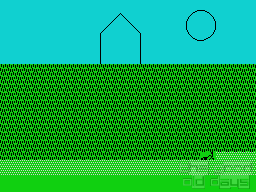