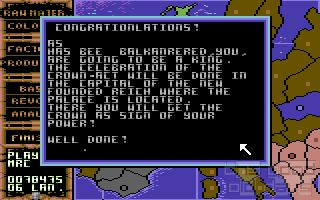 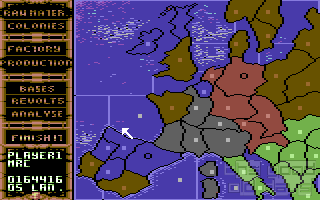 Formerly neutral Europe is being divided by ruthless superpowers
Risk's mass appeal stems, as a major part, from its simplicity which makes it so easy to understand. Scenario, on the other hand, attemps to take advantage of the technical management capabilities of the host computer, making careful extensions to the concept. For instance, income is only based on province taxes as a first step. This money can then be invested in raw materials which can be mined in the owned provinces and then sold on the world market for varying prices. Money can then be invested into factories for one of three army types or the armies themselves, to be thrown on the battlefield as cannon fodder. Oh, wait, there are no cannons – just tanks, aircrafts and ships, proving once and for all that this game was never intended to be a specific WW1 game, that having been mostly an infantry and artillery war still. 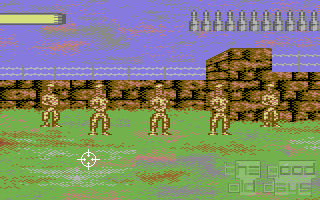 Sabotage!
Random events can still spoil the party, of course. Some are rather minor, like not being able mine a particular raw material for one turn. Other effects can be rather major, like the explosion of a factory – enough to break an empire's victory chances completely if it occurs in the early stages. As a welcome break from the rather abstract proceedings, some random events trigger short arcade-like scenes, like the factory sabotage shootout. Nothing spectacular, but nice.