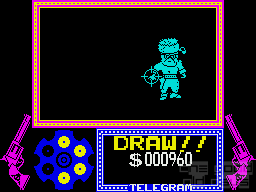 Howdy doody, pardner! Feel like serving the law and shootin' fer good reason? Well then, you came to the right place! Welcome to Black Rock and let's get the business started today! Congratulations, you're now the sheriff Quickdraw, and your task is to clean this old western town of armed villains compromising peace and safety of its citizens. Yep, that's right, it's Gunfright from Ultimate Play The Game, one of the most noted and commonly played games on ZX-Spectrum, where in capacity as town's sheriff you must alone fight the criminal world and put an end to it once and for all.

The game came out in 1985 for Spectrum, Amstrad CPC and MSX computer. Surprisingly enough, this time CPC version didn't even match up to Spectrum's, providing the game with a terrible palette, which is for the most part amber monochrome, discounting a few exclusively painted elements of technically the same colour, only different tone, and MSX version showed almost no modification whatsoever. There was no C64 version of the game, but… same year UPTG released a game named Outlaws, with similar theme, but overall different plot, graphics and scenery.

The graphics of the game are not original at all. Yes, same old pseudo 3D isometric perspective with an awfully familiar character, that looks as though his outfit was slightly remodelled, but other than that it's the same dude. It's the dinstinctive feature of Ultimate Play the Game (along with Filmation game engine), whose design was used to make other no less known games for Spectrum such as Nightshade, Sabre Wulf, Knightlore etc. So, I can't really say that the graphics of the game is really what makes it a knockout.

Now, the gameplay is what makes up for the threadbare visuals. First of all, it consists of 3 different parts, starting with the screen featuring falling money bags, where you must aim at each and shoot down as many as possible, thereby collecting money for possible future expenses, such as buying bullets in case of shortage, paying fines for accidentally or deliberately shot peaceful civilians or affording to ride the ridiculous horse, whereof we shall speak later.

The second part is the main playground, so to speak, where the actual town unfolds and you immediately proceed with the search for any bandits. By the way, the “wanted” poster on the left shows the name, face of the actual outlaw, reward, and the celebrated “Dead or Alive”, which is a bit misleading, cause in this game you don't really arrest anyone and put in jail, which no doubt would be cool, but that just isn't the case here. You are either to kill or be killed, which is revealed in the 3rd part of the game, where in the very traditional way you must draw and shoot before your opponent does it. This happens when you finally find your guy and take a shot at him, which though doesn't strike him dead, but rather serves to get you to the final shooting screen. It doesn't always seem fair, as your opponent moves much too quickly at times. Also, once opened fire he never misses. So, I have to say, losing to those guys occassionally is simply inevitable.

And now to cover some specifics and rather bizarre elements of the game. I would never stop wondering as to why in heaven's name the prevalent citizens of Black Rock would be… bearded ladies?! Or perhaps men wearing female clothes… anyway, this is one hell of a mystery. Luckily, they have no guns, but colliding with them is not recommended, as it may result in both a loss of life and a penalty, and it often seems that this is exactly what they want judging by their suspicious curvy route.

The town is quite big, so to find an outlaw would be a pretty tough thing to do, but fortunately for you there are these little dudes (midgets?!) showing you the direction in which your villain is located, which tends to change as those guys never stand still, but stroll all around the town. Midgets, bearded women… sounds like ye olde freakshow. Oh oh, i nearly forgot about “the horse”. Yes, in order for you to move around faster there is a horse always waiting for you at certain spots of the town, which never change, by the way, so you can always find it there. Wait, what…? A pair of small legs sticking out…? Nevermind, turns out the horse is bogus, but it somehow motivates the sheriff to move twice as faster. By the way, as you take down villain after villain they also get on “horses”, so you can take part in this goofy chase, which is fun, I have to admit.

Somehow this game is very addictive. You may simply wanna try it out, but then you hopelessly get carried away. At least such used to be my case.

Moebius:
Well, it's still strange to me that the town is populated with women or "donning cowls" (the white spots are eyes i presume, and any other details would perhaps overload spectrum's memory), kids wearing cowboy hats and just bandits and sheriff. That doesn't make the game worse, but.. it surely begets questions

My guess for the 'midgets' is that they are children. And as for the bearded ladies, well, they might either be monks (donning cowls) or the beard might be the face and the two white specks are the lady's hair.

But you version makes it sound a lot more fun.

Moebius:
Feel free to share anything about Gunfright (1985) here!
[Reply] 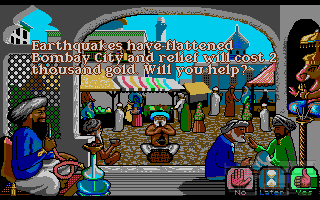