Archon – The Light and the Dark
for PC (CGA)
Also available for: C64 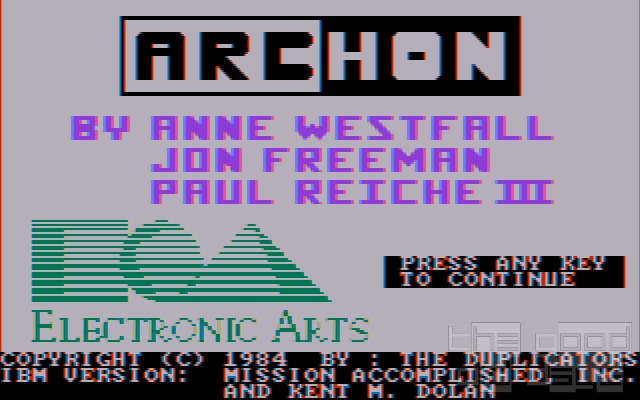 This is the PC port of the great game Archon. I played this game for hours at a time on the Commodore 64. The PC version plays identically. The graphics are, in my humble opinion, much better on the Commodore.

Basically, it is a fantasy chess game with a twist. Instead of pieces automatically taking the piece they land on, the two sides fight it out for dominance of the square. This is done in a two dimensional battle arena that expands from the chess board. Each arena is randomly generated and includes randomly placed obstacles that block movement and projectiles. Every battle continues until one side or the other emerges victorious by destroying their opponent. All damage taken by the victor remains. A wounded piece is easier to defeat. A piece will heal slowly over time, faster on a power square, or can be healed fully with the Heal spell (cast by the players Wizard/Sorceress piece.)

Every piece on the board has its own strengths and weaknesses. Some are fast, some are slow. They also have varied ranges for their attacks. Some can only attack nearby opponents directly in front of them. Some have an area around themselves they attack. Finally, others fire attacks that can cross the entire board (these can be blocked by the obstacles mentioned.) The pieces are different for each side, though the powers are generally similar.

The name The Light and the Dark is very appropriate for this game. The 2 sides consist of a light side and a dark side. The shade of a square represents the side that square will strengthen. A light side piece will be stronger on a light square and weaker on a dark one. The reverse is true for the dark side. There are also 19 squares that cycle back and forth from fully dark to fully light.

There are 5 “Power” squares on the board. Control of a Power square allows your Wizard/Sorceress to regain magic points (used for the casting of spells.) Also, controlling all 5 Power squares is one method of winning the game. The other methods are to destroy all apposing pieces, or to have all apposing pieces unable to move (with the use of the “Imprison” spell).

Overall, this is an excellent game consisting of both strategy and action elements. Good reactions can be offset by poor strategies, and vice-versa. It takes a balance of both to defeat your opponent.

Nevenbl:
I loved this game, one of best for C=64. How time is going fast, like it was yesterday that I played this game.
moo2:

Archon was really fantastic. I played it x-times against my cousin and it was always fun. I can remember, that I liked the "blue witch" better than the yellow dragon - because she could move while the "weapon (force field or so)" skill has been activated

. The dragon was always "frozen" while he transformed into that fireball thing.

My brother and I played this soooo many times! This must be my all-time c64 favorite.

My weapon of choice was the unicorn. 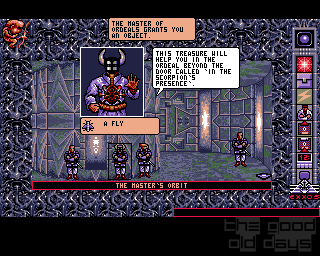