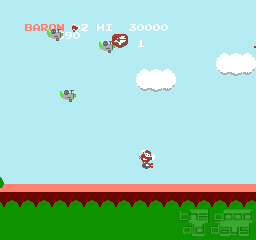 The old NES had a big deal of arcade games on it's repertoire. One of them, this small classic, puts in your hand an aviator from the first world war, in an attempt to destroy the enemy base.

Of course, they take some liberties, such as adding self-propelled aircraft cannons, a thing of the second war, but it still is about a sort of Red Baron fighting in the skies.

While that sums up the game neatly, which after all is an adaptation of an old arcade, there are a bunch of extra details which give more depth to it. First of all, the enemies are hard, they die in a single shot but can easily surround you. To avoid this you can do barrel rolls, which will get you out of harm, and desirably behind the enemy.

Learning to use this manoeuvre correctly is vital, as the game is unforgiving, but there is a second trick which actually is even more important, and it is all about bombing.

Laying around the level there is a bomb, and this is what you need to use at the end to blow up the enemy's headquarters. Of course, there is only one, so you better spot and catch it. But there is a catch, it is thrown doing a barrel roll, and the place is, as expected, well defended, so you not only need to plan ahead and aim well the throw, but also coordinate the action with a roll and planes which will be all over you.

Actually, that really sums the game neatly. It's short and simple, yet at the same time challenging and unforgiving. A bit repetitive, of course, but it was meant as a bar arcade, a game for a small quick game, and nothing else. And it works wonders as that. 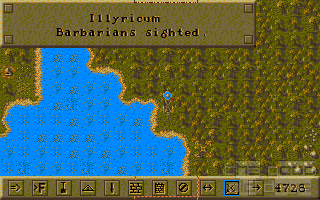