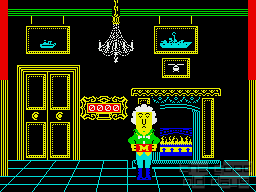 In this game you assume the role of a servant who was bold enough to apply for a job in Buckingham Palace, to serve each member of the royal family, and is willing to please them in every way, just to get their… autographs?! Well ain't that crafty. They don't call you Mad Flunky for nothing! But beware, they do not tolerate indolence and miscarriage. They expect you to be clever and resourceful, otherwise what the hell are you doing in the palace?! Remember, this isn't your grandma's house, and perhaps your own life is at stake! But if you play your cards right and show the best of your wits and dexterity, you may get to take orders from The Queen herself!

Flunky was created by Don Priestley and published in 1987 for ZX-Spectrum, CPC and C64 by Piranha. It was also ported to Atari ST as Mad Flunky by another company, which is why that version is officially missing from the shared list of platforms pertaining to the game. Apparently, it's not exactly a port, but just a remake.

The looks of the game is definitely a stunner. Every bit of it is full of living colour. The atmosphere and the characters appear grotesque, yet somehow captivating. You can see the effort of the game developers to endow their game cast with emotions, facial expressions, unique personality and demeanor (often eccentric), compensating the lack of graphical resources with a tinge of comical flair, which actually makes the game quite fanciful and attractive.

You start in the lobby, just as you leave the game control room, and immediately told by the guy on the left, who's supposed to be a doorkeeper, but looks like some sorta prophet with a staff, that you must “go and light all the fires”. Deep as though it may sound, it simply means that you must light the fireplaces in every room of the palace, which isn't really your primary mission, but it's a little addition to game's difficulty I suppose.

There are three rooms in total, two of which are occupied by two couples, that is, a couple in each of the two, while the 3rd room belongs to The Queen only. You can immediately enter any of the two rooms, but you cannot enter the Queen's chamber until you're done with the other two. There are guards here and there in the game, which are always ready to shoot you for both good and bad reason. They don't fire you in this game. They fire AT you, so you have to watch out. This is exactly what happens if you attempt to leave a room without having carried out all the orders, lit the fire AND taken them people's autographs, which is done by giving them an object with letter “A” on it. And yes, there's also time in this game, given to fulfill each family member's request, which though isn't a crucial factor, as it's really enough to accomplish 3 missions, should you know HOW.

The tasks are rather weird and even more so the ways of accomplishing them, which may beget questions in your mind as to what exactly these people had smoked. Like any other Spectrum adventure, this one is empty of any hints and clues unless you know exactly what to do. Let alone concise and mysterious requests such as “Flunky, I want some freckles”. I'm not sure whether or not it's a bad thing. One one hand it's not cool being permanently confused, then again the more obscure and sophisticated it is, the bigger delight and rapture on completion, and also this way you don't feel as if someone's guiding you through some sorta interractive cartoon (as in the sad case of many PC adventures), where eveything's technically already solved, you must only push the right buttons to unfold it. That's not how it is with Spectrum adventures, which adds a sense of realism to it, regardless of the nature of tasks, which are all too often bizarre and unthinkable.

The game includes minor arcade elements such as controlling the toy helicopter in order to bring down a motorboat, or deflecting balls using a peculiar spring gadget, which is fun. By the way, some of these tasks are also dangerous in themselves, which is mostly unexpected. The palace is nicely ornated and has a sufficient space to explore, including the underground, where you may sometimes hide from overdoing guards. Your life-o-meter is located in the hallways in a form of a painting with a respective number of kittens displayed on it (what?!). The people living in this crazy joint, as some of you might have guessed, are no other than royal British family consisting of Andrew, Duke of York, Sarah, Duchess of York, Charles, Prince of Wales, Diana, Princess of Wales (R.I.P.) and Queen Elizabeth II.

Moebius:
Feel free to share anything about Flunky (1987) here!
[Reply] 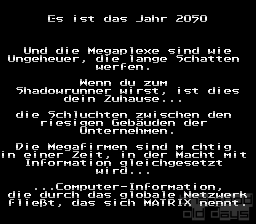