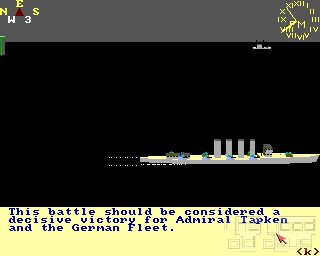 One of the major reasons cited as being the cause of the First World War was Imperial Germany's challenge to the British naval supremacy. Prestigiously large battleships had been built on both sides, and what would you build them for, if not to finally put them to their intended use? Which, ironically, didn't really happen all through the war, then, when both sides realised that losing such super expensive ships would constitute not just a military, but also a propaganda disaster. Still, there were a couple of encounters which, in the hands of Peter Turcan, got turned into this game.

Now, if you've played one Turcan game, you've played them all, haven't you? Indeed, the good doctor's final game doesn't even attempt any large break away from his previous assembly line titles like Waterloo and Gettysburg. In fact, he had even already made a naval strategy game (Armada) before. All of those aforementioned games were released in 1989 and 1990. Two (or even three) years later, preciously little has happened.

Five historical battles and an introductory level are included into Dreadnoughts (more came later as expansions). Each side can be taken over by a human player or the computer AI. The players then give detailed commands, or even complex command chains, to each of their ships… by using a free text command line! The input will then be parsed and hopefully understood – otherwise, it is „Sir, this doesn't make any sense“. The less error-prone way, of course, is to simply construct the same commands by clicking through selection lists.

Everything is graphically presented in the usual three-dimensional model view. This allows relatively free scaling and turning. It's both (theoretical) booth and (practical) bane, and not just because screen redraw is annoyingly slow on standard machines. Since there is no (visible or otherwise discernable) pattern to the 'landscape', not even theoretical squares on which the units are moved, an engine which provides adjustable views is absolutely required. Though this very engine achieves nothing but making the player lose overview immediately. Everything just being blue (most battles don't even take place in the proximity of land) certainly doesn't help.

The AI is competent, the range of possible actions impressive. Graphically, the game doesn't even look too shabby. Playability is still pretty bad, however. Everything just takes way too long, whether it's entering commands (with the usual death penalty should you just forget one single unit, because obviously, captains won't just act on their own best judgement lacking explicit orders), changing the view, the AI thinking about its moves or even getting to the end of any battle.

In fact, I place Dreadnoughts even below the landlocked Turcan games: the endless open seas restrict the player's tactical options quite a bit, which is a blow even for the few diehard Turcan fans. It certainly is a 'different' scenario, but it's also one which just isn't all that interesting, because the title really says it all: it's all about those large, heavy battleships. Submarines, transports or even support from early planes could have spiced things up. It may not have been a 'historical simulation' anymore, then, but it might have made for a more interesting 'game'. Like those historical ones, these slow battleships should have better stayed in port.