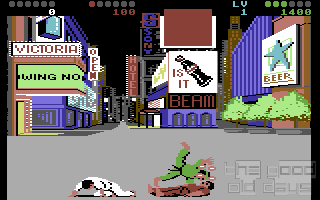 The Way of the Exploding Fist was good. International Karate surpassed it, though. Fist 2 was absolutely awful. IK+ carried on the original legacy and intelligently extended the gameplay. Time to strike back!

To win the audience back, Fist+ would primarily need one thing: superior quality. Secondly: something innovative. Let's look at the second point first.

The full name of the game is "Fist +". Exactly in this spelling. Notice something? IK had had its second part shortly before, and it was called "International Karate +". Theory based on this similarity: Fist+ is an imitation of IK+.

A quick look at the game is enough to confirm this suspicion. Three fighters simultanously, point system, moves, graphics - it's all the same. Just with Fist sounds and controls. Conclusion: no originality at all!

So, back to the first point. Even though it's just a copy of another game, it could be better. Just like IK had bettered the original Fist. Back in the days of these games, there was a huge discussion about which controls are better. Objectively, both are equal, though - all arguments in favour or against one are just based on what certain people are more used to.

There are some fairly objective points to compare the games left, too. One being the game speed and animations. IK+ takes the trophy there. Fist+ is still very much like the original Fist, and while this may have been acceptable three years earlier, it was just only bearable in 1988. Conclusion on the first point: Beating IK+ failed.

While Fist+ is a very good game (and easily the best in the Fist series), it's only a poor man's IK+ in the end. There is simply no single reason to prefer this game. Which is somewhat sad.

Mr Creosote (2014-12-13):
True, but on the other hand, this makes Fist+ fairly undistinguished from IK+ whose sprites are virtually identical.
Moebius (2014-12-12):
I have to admit that this game looks better than its Spectrum counterpart, at least because here the initial characters have been retained up to every single sprite to match the graphics of the first part of the series, while Spectrum version adopted those from Fist 2, which may appear cool on one hand, since those characters are now clearly distinguished (not just by the color of their uniform), and on the other hand.. who said those sprites of Fist 2 were any good?!