Knights of Xentar
for PC (VGA) 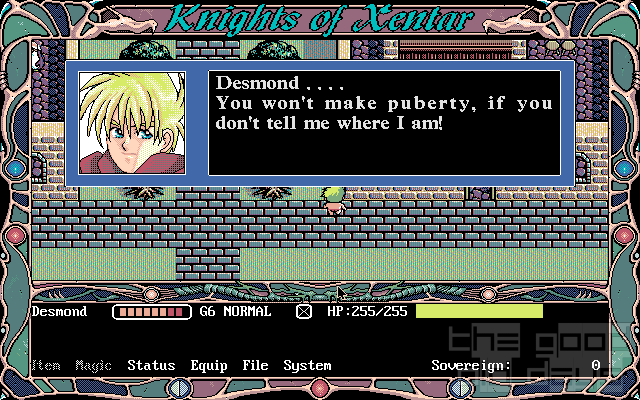 Knights of Xentar is one weird ass RPG. You play as Desmond, a knight with a kids voice who gets his sword, jewels, and clothes stolen by bandits at the very beginning. As soon as you save the daughter of a storekeeper and get some equipment, it's off on a quest to get your stuff back while saving lots of girls in the process. (Keep in mind that the US version is censored by default unless you install the NR-18 Kit)

Unlike any other RPG that I've played, you don't make your character attack enemies, instead, your character attacks the enemies for you. While this may sound like there's no interaction, you do have options during the battle such as using health potions and stuff to stay alive during these battles. You can also change the fighting style for example, you can either have your character go for all attacking or you can have your character focus on defense so that you take less damage though it will also take longer to kill your enemies if you do this. When you're not in battle, you're in a top down perspective just like every other RPG and when you're in battle, it switches to a side view just like every other RPG. It does make for a different RPG experience, that is for sure.

When you kill enough enemies, you do level up and there's a spot early on in the game where you lose all of your skills which is where you have to start working to regain all of the skills you started out with. Later on in the game, you also get 2 other characters that join in including a female character named Luna. When it all comes down to it, the main appeal of the game is rescuing lots of girls from the evil clutches of perverted monsters and crap. (Its definitely obvious when the NR-18 Version is installed.)

You use a keyboard and a mouse to control the game. Everything moves in block areas and when you hold down any arrow key, you first take a step, then soon you start moving which, while a weird delay, isn't huge enough to be annoying. While the game can be played using only the keyboard, a mouse is highly recommended as it makes for using potions and crap during the battles alot easier.

Running at 640x400 VGA, this game proves that even with 16 colors, you can make good looking games. The Anime artwork looks beautiful, especially when playing on a CRT monitor like I had on my DOS PC. The in-game graphics are also pretty good with animation, though the scrolling isn't smooth. (Though it seems to feel a little smoother if played on DOSBox instead of real hardware for some reason.)

The sound effects gets the job done. Hovever, the voice acting is another story. Let's just say this game has some of the most cheesiest voice acting ever in a video game. (This is only on the CD version which is what I have.)

Keep in mind that I'm using a AWE64 and running the game in its Sound Blaster mode.

The OPL generated music in the game is freaking awesome. I'm not sure how it compares to the original PC-98 version but it sounds very good and at some times epic. (Though it's not as good as the music in other RPGs like Final Fantasy, though oh wait, the early Final Fantasys weren't released on the PC.) For a MS-DOS game in 1994, the soundtrack is pretty good for FM Synth. (And no, there's no support for Roland cards or MIDI.)

I probably won't be getting far into this game, but if your into weird Japanese games and/or like Anime themed games or want a RPG for the PC, then I would recommend Knights of Xentar. Its not for everyone as there's raunchy dialog and it can get even more adult if you installed the NR-18 version. If you don't like this sort of stuff, then I don't recommend this game.

Specs of PC used for reviewing the game

Quote:
Unlike any other RPG that I've played, you don't make your character attack enemies, instead, your character attacks the enemies for you.
Can't remember this at all, but it does sound like a cool twist.
Quote:
looks beautiful, especially when playing on a CRT monitor
Totally agree on that one: There are graphic modes which look so much better on a CRT. Maybe it's the more intense colours or the clearer picture.